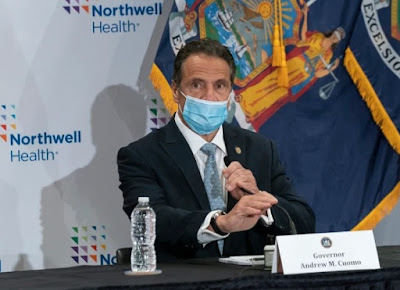 The updates posted below about the dead=trash nursing home scandal in New York show that Gov. Andrew Cuomo, his brother Chris Cuomo, and the Cuomo cabal could not care less about what the general public thinks about their health and welfare for NY State's citizens into a trash bin.

The real tragedy is that New Yorkers have a clown as the Governor, a man who wants fame and glory much more than the safety of the people in his constituency.

And, he's blaming everyone but himself for the scandal.

Gov. Andrew Cuomo is a hypocrite on life, death and nursing homes: Devine

In his daily coronavirus briefing on Wednesday, Gov. Andrew Cuomo was as haughty and boastful as ever.
The difference this time was that the Albany press pack didn’t give him a free pass.
It’s incredible how highly he rates himself when he has presided over the most COVID deaths of any state in the nation by far — 22,976 as of Wednesday, some seven times more than California, 11 times more than Florida. New York still hasn’t come to grips with why that is. The disparity is not a random act of God, as the governor would have us believe.
He bears at least some culpability. He was slower to respond to the threat of the virus. And then he compounded that error with the unforgivably callous act of forcing nursing homes to admit COVID-positive patients — a death sentence for other residents as the infection spread like wildfire.
And yet, not a trace of worry do we see on Cuomo’s tanned face.
There is no remorse, just buck-passing.
Wednesday, for instance, he blamed President Trump for the nursing-home deaths. The chutzpah is astonishing.
But at least he faced tough questions about a potential federal probe into his March 25 directive to nursing homes.
“I have refrained from politics,” he said, laughably. “But anyone who wants to ask ‘why did the state do that with COVID patients and nursing homes,’ it’s because the state followed President Trump’s CDC guidance.
“So they should ask President Trump.”
Cuomo even tried to claim that the more-than-5,500 deaths connected to nursing homes in New York was a better toll, per capita, than most other states.
But the state Department of Health seems to have fudged the death toll, admitting it does not count nursing-home residents who ended up dying in hospital of the coronavirus, so the real numbers are much higher.
Asked about this convenient accounting, Cuomo returned to Trump: “The state followed President Trump’s CDC guidance . . . No numbers were changed.”
A reporter pointed out that Cuomo has shown a “willingness to thwart President Trump at other times.” Why not on his March 25 nursing-home directive?
Good question, which ­Cuomo couldn’t answer.
Instead, he switched to blaming the nursing homes.
“In retrospect, do you think that was a bad decision? Do you think it contributed to the death toll?”
“No,” said Cuomo. “Because you have to be saying the nursing homes were wrong in accepting COVID-positive patients.”
It is Kafkaesque. First, he orders nursing homes to obey a directive with his name emblazoned at the top of the page: “All NHs must comply with the expedited receipt of residents returning from hospitals . . . No resident shall be denied readmis­sion or admission to the NH solely on a confirmed or suspected diagnosis of COVID-19.”
The nursing homes were “prohibited” in that March 25 directive even from COVID-testing discharged patients.
But now that the policy has blown up in his face, he blames those same nursing homes for doing what he ordered them to do.
“We always had alternative beds . . . Any nursing home could just say, ‘I can’t handle a COVID person.’ ”
Yet in April he told a reporter at a press conference that the nursing homes “don’t have the right to object.”
His reversal of the directive on Mother’s Day was a tacit acknowledgement of wrong­doing, as was the legal indemnity for nursing homes that he reportedly slipped into the state budget in late March.
The terrible thing about ­Cuomo is that he has the appearance of being everything he’s not. He is a facsimile of a take-charge alpha male who stands up and takes responsibility. In reality, he behaves like a dithering, vain, deceitful bully.
He appears to be a moral Catholic family man who talks about his days as an altar boy and expresses concern for the sanctity of life.
“To me, I say the cost of a human life, a human life is priceless. Period,” he philosophized one day while trying to justify his decision to keep everyone in lockdown.
But it’s not true. He doesn’t think every human life is precious at all.
Last year he pushed for ­euthanasia legislation and gloated about signing into law the state’s late-term abortion laws. He even had One World Trade Center lit in hot pink in an obscene celebration of death.
And didn’t he just tell us breezily last week, as the heat from his nursing-home fiasco dialed up: “Older people, vulnerable people are going to die from this virus. That is going to happen despite whatever you do.”
He made sure of it.
We knew from the start of the pandemic that the frail elderly were most at risk. Florida, with its big retired population, moved early to protect nursing homes.
A mistake is one thing, but Cuomo’s lack of remorse or self-doubt is chilling.
“I feel very good about how exhaustive I have been in communicating,” he boasted on Wednesday.
It is true he has been communicating “exhaustively.”
His “love gov” routine — joking around with his brother on CNN and strutting his stuff as New York’s most eligible bachelor — has done wonders for his approval ratings.
But it doesn’t save the people who died distressing deaths, unnecessarily and alone, in nursing homes that he knew could barely cope at the best of times.
Cuomo brothers' jokey CNN interview ignoring nursing home controversy sparks outrage

Health Commissioner Howard Zucker’s approach to the coronavirus crisis in nursing homes is even worse than we’d thought: It turns out his Department of Health didn’t even try to track deaths in homes for a full month after the state reported its first fatalities.
New York’s first confirmed COVID-19 deaths came March 14, but it wasn’t until April 17 that DOH began comprehensively asking nursing-home administrators how many residents had died of the disease, the Syracuse Post-Standard has revealed.
The department was in contact — sending daily questionnaires asking how many masks and how much hand sanitizer homes had on hand, among other data. But it wasn’t until news broke of growing outrage among residents’ families that the state thought to systematically ask the most crucial question.
And then DOH just flailed: It e-mailed homes on April 17 at 7:03 a.m. to ask, “What is the total number of residents who have died in your nursing home of COVID-19?” It set an 8:45 a.m. deadline for replies.
The next day, it ordered administrators to document every coronavirus death over the prior six weeks — in a noon e-mail with a 2:30 p.m. deadline.
All this, as Zucker mandated on March 25 that homes take in COVID-positive patients. That’s right: He gave that order without having even tried to learn how many residents were dying from the bug. (Then again, this is the guy who ordered EMTs to not bother trying to resuscitate heart-attack victims until The Post exposed that madness.)
Zucker seems to have focused purely on keeping hospitals from becoming overwhelmed, to the point of sending infected patients into the facilities housing those most vulnerable to the bug. Now the virus has taken some 5,600 nursing-home lives, and experts believe the true toll is far higher.
Gov. Cuomo has repeatedly insisted his team is basing all its moves on the data, yet Zucker wasn’t even collecting key info on the most at-risk population. Surely the Empire State deserves a better health commissioner than this.
Posted by Betsy Combier at 12:54 PM