The actions of Amazon management show clearly the pattern and practice of retaliation against employees that is so pervasive throughout corporate America and public entities such as Departments of Education and charitable organizations.

What happens next in the Amazon saga will pave the way for everyone else.

City Has Lost Contact With 2,600 Students Since MarBetsy Combier

The number of charges filed with the National Labor Relations Board accusing Amazon of interfering with workers’ right to organize more than tripled during the pandemic.

By Olivia Solon and April Glaser

The day after Jonathan Bailey organized a walkout over Covid-19 concerns at an Amazon warehouse in Queens, New York, he was, he said, “detained” during his lunch break by a manager in a black camouflage vest who introduced himself as ex-FBI.

Bailey, who co-founded Amazonians United, a network of Amazon workers fighting for better pay and working conditions, was ushered to a side office and interrogated for 90 minutes, according to testimony filed to the National Labor Relations Board, or NLRB.

The manager asked exactly what Bailey had said or done to get his fellow workers to join the walkout. When Bailey declined to explain, the manager shifted his tone. He told Bailey that some people “felt hurt” by what he did and that it “might be seen as harassment,” Bailey said.

“It was already a pretty intense conversation. But it became very clear they were trying to intimidate me,” Bailey said. “Being accused of harassment is a very dangerous thing.”

A week later, Bailey received a formal write-up for harassment, although his managers would not tell him whom he had allegedly harassed, nor what he had allegedly said or done, according to his NLRB testimony.

Bailey, who still works for Amazon, believes that was part of a corporate strategy to silence organizers, and in May 2020 he filed a charge against Amazon to the NLRB alleging that the company had violated labor law by retaliating against him for protected, concerted activities. The board found merit to the allegations and filed a federal complaint against Amazon.

This month, a year after Bailey staged the walkout, Amazon settled. Under the terms of the settlement, Amazon was required to post a notice to employees, on physical bulletin boards and via email, reminding them of their right to organize.

"Amazon will work to destroy your character and try to keep you from talking about what’s actually going on,” Bailey said. “And it’s all so that Jeff Bezos can make more dollars.”

Bailey’s complaint is one of at least 37 charges filed to the NLRB against Amazon, America’s second-largest employer, across 20 cities since February 2020, when news of the pandemic began to spread, according to an analysis of NLRB filings by NBC News. These complaints accuse the company of interfering with workers’ rights to organize or form a union. That’s more than triple the number of cases of this kind filed to the agency about Amazon in 2019 and six times the number filed in 2018.

For comparison, Walmart, America’s largest employer, has had eight such charges since February 2020. The meat-processing giant JBS, whose workers have been fighting for better working conditions throughout the pandemic, including staging protests, had nine.

The number of similar charges filed against Amazon over the last year has become significant enough that the NLRB is considering whether the “meritorious allegations warrant a consolidated effort between the regions,” NLRB spokesman Nelson Carrasco said. Typically NLRB charges are investigated by one of 26 regional offices. But in rare instances the board combines cases into a consolidated complaint, as it has done with Walmart and McDonald’s, if it believes there is a pattern emerging at a company.

Amazon declined to comment on the increase in NLRB charges.

Labor experts said that the surge in such charges reflects a dramatic increase in organizing among a small but vocal portion of Amazon’s 500,000 warehouse workers across North America during a coronavirus-led boom in online retail, leading to record sales and an almost 200 percent increase in profits for Amazon.

Workers have been coming together to demand better working conditions — including through solidarity campaigns, strikes, protests and walkouts — at warehouses across the United States, including in Chicago; New York; Minneapolis; Iowa City, Iowa; Sacramento and the Inland Empire of California; Salem, Oregon; and King of Prussia, Pennsylvania.

As worker activism gains momentum, so, too, has Amazon’s effort to counter it with anti-union propaganda, firing key organizers, surveilling employees and hiring Pinkertons to gather intelligence on warehouse workers.

NBC News interviewed more than two dozen Amazon warehouse workers, nine of whom said they had been fired, disciplined or retaliated against for protected activity and three of whom filed NLRB complaints since the pandemic began. They allege that Amazon has in some cases selectively enforced its policies on issues such as social distancing, vulgar language and insubordination to target those speaking up for worker rights. A handful of workers, including Bailey, said that allegations made against them by Amazon seemingly play into racist stereotypes of Black men being angry or aggressive.

“We have zero tolerance for racism or retaliation of any kind, and in many cases these complaints come from individuals who acted inappropriately toward co-workers and were terminated as a result,” said an Amazon spokeswoman, Leah Seay. “We work hard to make sure our teams feel supported, and will always stand by our decision to take action if someone makes their colleagues feel threatened or excluded.”

But labor historians note just how significant this fight is for the future of employees at one of the world’s fastest-growing companies.

“There is a David versus Goliath aspect to this. Workers getting paid $15 per hour are going up against one of the world’s most powerful corporations owned by the world’s richest man,” said John Logan, director of labor and employment studies at San Francisco State University. “Having a union would be a disaster for Amazon, so it’s pulling out all the stops to prevent workers from organizing.” 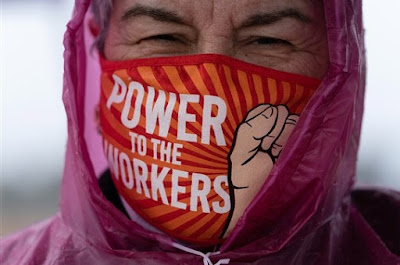 A demonstrator wears a mask that reads "Power To The Workers" during a Retail,
Wholesale and Department Store Union protest outside the Amazon BHM1 Fulfillment Center
in Bessemer, Ala., on Feb. 7.Elijah Nouvelage / Bloomberg via Getty Images

The highest-profile organizing campaign is in Bessemer, Alabama, where 5,800 workers are in the midst of a precedent-setting vote to form a union. There, Amazon is waging what labor experts like Logan describe as a classic and well-funded union-busting campaign. Workers described how Amazon required them to attend mandatory meetings to hear why the union was not, in Amazon’s view, beneficial for workers. The warehouse is filled with banners and signs encouraging workers to vote against the union and the company set up a website and hashtag, #DoItWithoutDues, to warn them about union fees.

“They are doing everything they can to try to convince the people to ‘Vote no,’" said Darryl Richardson, an Amazon employee in Bessemer who is organizing with the union drive. "There are signs right over the men's stall, so when you use the bathroom it’s right there face to face.”

Seay, the Amazon spokeswoman, said that it was important for employees to understand the facts of joining a union.

Amazon’s anti-union campaign states that union members would have to pay $500 a year in dues with no guarantee of better pay. Economic research indicates that collective bargaining unions generally raise pay for both union and nonunion members. “Amazon fears the union because of the leverage it can have to organize strikes that could cripple the business,” said Michael Pachter, an analyst at Wedbush Securities, a Los Angeles-based investment firm, noting that Amazon’s efficient customer service is critical to the company’s success.

Seay said Amazon hosts "regular information sessions for all employees, which include an opportunity for employees to ask questions."

"If the union vote passes," she added, "it will impact everyone at the site, and it’s important all associates understand what that means for them and their day-to-day life working at Amazon.”

The company offers a $15-an-hour starting wage, benefits and a clean working environment for its employees, a spokesperson said.

Elsewhere, the company’s crackdown on organizing has been more insidious, say workers and labor experts.

“They made up stupid reasons to get rid of each of us,” said Courtney Bowden, who was fired from her warehouse job in King of Prussia, Pennsylvania, last March after advocating for sick pay for part-time workers. According to her complaint filed to the NLRB, management at her warehouse targeted her by “selectively and disparately” enforcing rules around how workers should wear their hair and later fired her for an altercation with a co-worker.

In November, the NLRB determined that, following an investigation, it found merit to the allegations that Amazon had illegally retaliated against Bowden, according to public records first obtained by BuzzFeed. A hearing before an NLRB judge is scheduled for later this year.

“If what they set out to do is shut down organizing, I think they are doing a good job right now,” Bowden said. “But when you take out some people there will always be someone else later down the line.”

John Hopkins, an organizer who worked at a warehouse in San Leandro, California, agreed. Amazon suspended Hopkins for three months starting in early May 2020 for violating a relatively new social-distancing rule forbidding workers to stay on site for longer than 15 minutes after their shift ended. In the months before his suspension, Hopkins had been distributing pamphlets about union organizing to co-workers after becoming concerned about the company’s handling of the pandemic. Hopkins, 34, was worried about the risk of exposure to the virus at work, particularly since he lives with his stepfather and brother and both are cancer survivors.

The pamphlets he had been leaving kept disappearing from the break room and notice boards, and nobody in human resources would explain why, Hopkins said. On May 1, he filed a complaint with the NLRB against Amazon, noting that other flyers, such as job postings for third-party delivery companies, were allowed. That night, he clocked out in solidarity with a sick-out protest held by essential workers in the United States, but stayed in the break room to talk to co-workers about organizing. Management asked him to leave, which he did after arguing that it was protected activity. He was suspended the next day.

“It seemed like a very disproportionate punishment,” Hopkins said. “I felt like they isolated me so I couldn’t get other workers rallied on my side. But they pretended they didn’t see the connection between my union organizing and my suspension.”

While the NLRB initially dismissed Hopkins’ case, it is revisiting it as part of the agency’s larger investigation into Amazon’s alleged retaliation.

Labor experts say that Amazon warehouses are also designed to detect and squash organizing through surveillance technology, including the scanners workers use to track the rate at which they sort and pack items, mandatory daily worker surveys, and AI-powered camera systems to detect social-distancing violations.

“Amazon controls workers’ bodies and movement in such minute ways, ostensibly to track productivity, that people cannot have any purpose in the workplace except for to produce,” said Veena Dubal, a law professor at the University of California, Hastings, whose research focuses on law, technology and gig work. “It’s inherently union busting.”