Melinda Anderson: Why Are The Black Teachers Disappearing - Again? 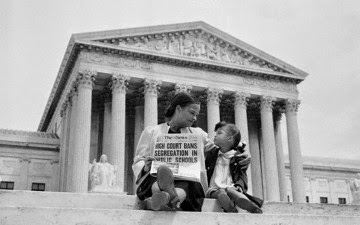 THE DESEGREGATION OF AMERICAN SCHOOLS PUT BLACK TEACHERS ON THE CHOPPING BLOCK. WHAT'S TAKING THEM OUT OF SCHOOLS NOW?LINK Follow us: @EbonyMag on Twitter | EbonyMag on Facebook 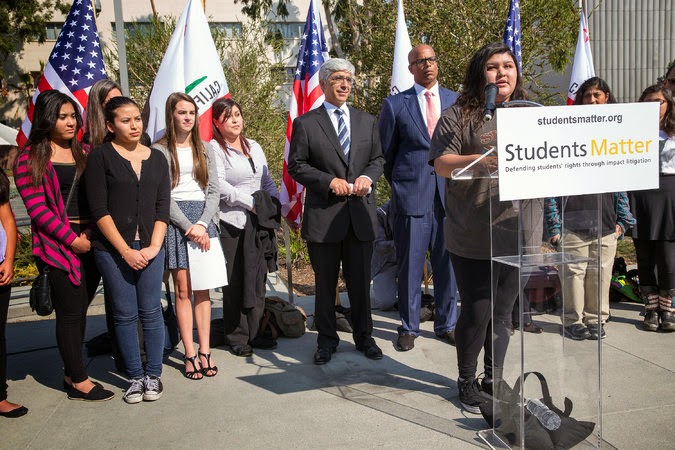 A June 10th lower court decision in Vergara v. California found that five California teacher  statutes violate the State Constitution's Equal Protection Clause by disproportionately maintaining "grossly ineffective teachers...in schools serving predominantly low-income and minority students."
Speculation immediately turned to Vergara-type suits in other states with the aim of eliminating or weakening teacher tenure and other job protections across the country.
Not so fast.
The ink is hardly dry on Vergara and a lengthy appeals process awaits. Meanwhile the contested statutes remain on the books. Final victory for plaintiffs is hardly inevitable since the trial court decision shows scant evidence proving that the statutes themselves, rather than feckless administrators' failure to initiate required evaluation and termination proceedings, were the cause of plaintiffs' alleged educational injury. In addition, the court's high bar requiring the state to show a compelling interest in preserving each of the current statutes is wide open to appellate attack.
On the other hand, there is little legal traction to arguments that Vergara is over-dependent on suspect test score data and predictions that teacher quality will fall without the statutes'  guarantees. Not that those aren't good points - but they are not legal arguments. As the court took pains to address, this case will be won or lost on legal principles of equal protection based on California precedents and facts established at trial, not  pronouncements about the best system of teacher evaluation and due process rights for optimal educational quality. Judge Treu made clear that he believes the judicial system is too crude an instrument to decide those matters and that, under our system of separation of powers, curtailing the evidentiary parade of horribles that he said "shock the conscience" requires legislative remedies.
Which is why Vergara is more an opening for public debate - likely the main intention of the lawsuit - than it is a catalyst to directly bring about substantial changes in state or national education law. For example, Judge Treu found that California's two year probationary period prior to tenure was too short to adequately evaluate teacher quality, disproportionately penalizing poor and minority students. What if, in response, the state legislature changes that period to three years, which Vergara looks upon favorably? New fact, new case! Any or all of the statutes in question can be tweaked - cynically or not - to meet legal requirements surviving appeal.
Similarly, beyond California, any attempt to nationalize Vergara faces a tortuous path, much like the school finance battles that ensued late in the twentieth century and  today. Each state, assuming the presence of equal protection, will have its own precedential scheme for interpreting those laws. Each will have its own constellation of teachers' employment rights. Each will have different statistical  of the presence or absence of incompetent teachers based on differing measures. In short, each years-long case will need to be financed and litigated individually, an extremely tall order, especially when legislative responses after any wins will have the potential to undo plaintiffs' initial expectation of educational improvement.
Remember, too, that teachers' working conditions are not generally statutory but bargained with school districts. It's even a little weird that tenure is a statutory right at all, treated as a public good rather than a private benefit. Teacher unions have been particularly successful in selling that idea so that they do not have to subject tenure, first-in-first-out, and other job protections to the give-and-take of cyclic .
But surely, if the Vergara plaintiffs ultimately succeed at total elimination of tenure, FIFO, etc. at the state level, the fight will just move to districts where school boards will vie with one another to offer sweet deals on job security and due process to attract the best teachers. Like white flight after Brown v. Board of Education, invoked by Judge Treu in the first line of Vergara more as a benediction than a precedent, any state-level evisceration of teacher job protections will have a negative checker-board effect on districts.
I support teacher tenure since it allows teachers uniquely necessary opportunities for classroom freedom and student advocacy that would otherwise be threatened by supervisors or public disapproval. But, with varied experience as a teacher union organizer, New York City Board of Education General Counsel, and expert witness for school districts in termination proceedings, I have too often seen procedural protections used as a sword to preserve ineptitude rather than, as intended, to shield professionalism.
Healthy debate is necessary over these policies and practices, including the crying need for administrators to vigorously exercise their supervisory duties toward probationary and tenured teachers alike. As a catalyst for this debate, Vergara serves a useful purpose even if, as legal mandate, it stands on shaky ground.
***David C. Bloomfield is Professor of Education at Brooklyn College and the CUNY Graduate Center. He is the author of American Public Education Law, 2nd ed. and many other works, including an earlier column, Teacher Tenure Tantrum.
Posted by Betsy Combier at 5:11 AM No comments:

Mark Naison: Why Teacher Tenure And Due Process Are Important


Why Teachers Need Tenure and Due Process:

LINK
Teaching is an incredibly "political" profession. The content of curriculum, as well as school budgets and  policies are the subject of intense debate from local school districts through legislators. Public officials, given a chance, will use schools as centers of patronage or places where they build political machines, and they will attempt to make teachers serve those ends if teachers do not have basic job protections. Then there are the parents. Some parents see all the needs of all children as foremost. Others will do anything to get  treatment for their child. If they are powerful, they will use that power to try to bend teachers to their will. I have seen this in action in schools I have worked in ( as well as sports leagues). Teachers need basic job protection to defend them from those parents, who exist, sometimes in small numbers, sometimes in large numbers in every school. Finally, teachers need protection from abusive administrators who are, thankfully, a minority, but do exist in every school district in the country. And these job protections, which protect teachers from abuse, intimidation, bribery, insider dealing and special influence, also protect children, because if teachers are bent to the will of powerful politicians, helicopter parents and abusive administrators, children will suffer. That is whey every society in the world with good schools has the kind of  protections people here are challenging. And by the way, every single thing I have described above I have seen operating first hand

POSTED BY MARK NAISON AT 3:13 PM
Posted by Betsy Combier at 9:27 PM No comments: