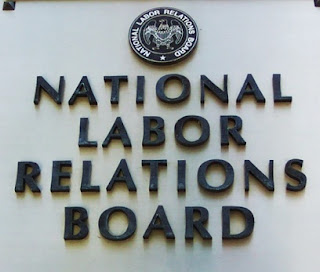 Last week was a dark week at the National Labor Relations Board (NLRB). In a series of major and somewhat unexpected split decisions, the Board overruled five significant pro-worker precedents and set in motion the undoing of the Board’s election rule. These decisions touch upon major aspects of the employer-employee relationship, including employer handbooks, when two or more employers can be considered a joint employer, what constitutes an employee bargaining unit, and when companies can make unilateral changes in a contract. In each instance, they tilt the already employer-friendly balance heavily in favor of employers.

These precedents took years to develop, and the results of many have not yet become evident. So, why the rush to overturn them by last Friday? The following day, on December 16, Chairman Miscimarra’s term expired. It appears that rather than consider these important matters in a deliberate and proper process that meets the purposes of the National Labor Relations Act (NLRA), they were rushed through in order to avoid a temporary lapse in a conservative majority. Years of carefully considered decisions by the Obama (and Bush) Labor Boards have been undone in a week, with the result that workers who have traditionally faced an uphill path to organizing and bargaining collectively will have even less power.

In 2014, the NLRB made a public announcement that it was considering revising its joint employer standard. At that time, the number of workers at temporary agencies reached an all-time high of 2.87 million and was expected to reach 4 million by 2022. Many of these workers ostensibly work for an employment agency, but they are placed by and actually work for another company. During the period when the number of temporary employees grew, the NLRB incrementally made it more and more difficult to determine that two companies constituted a joint employer.

As a result, when these temporary employees—and sometimes permatemps—wanted to form a union, many of them would find that only their staffing agency was required to bargain with them, and not the company that co-determined many of their terms of employment. This was because employees had to prove that the putative joint employer exercised “direct and immediate” control over employment matters.1

Even when employees were able to meet this high bar, they would then have to show that the control was not “limited and routine.”2 Therefore, such unionization efforts were often fruitless, because an important player in the employment relationship was absent.

So, in late 2015, in a decision called Browning-Ferris, the NLRB created a new joint employer standard that more accurately determined who constituted an employer. The decision stated that “We will no longer require that a joint employer not only possess the authority to control employees’ terms and conditions of employment, but also exercise that authority. Reserved authority to control terms and conditions of employment, even if not exercised, is clearly relevant to the joint-employment inquiry.” In determining whether two employers are joint employers, the Board would look at the management structure and the relationships between the companies’ supervisors and HR managers; how decisions regarding hiring, discipline, and termination are made; how wages and benefits are set; the types of training conducted; how work processes are governed; and other terms of the agreements regarding employees between the two entities.

Browning-Ferris took a clear-eyed approach to how power works in the relationship between a staffing agency and the company it staffs. It acknowledged that reserved power and control is still power and control, and that in reality, many of these companies controlled and determined the wages and terms of employment for their temporary workers.

Therefore, Browning-Ferris created a two-part test to determine if two employers were joint employers: first, the Board would ask if there was a common-law employment relationship with the employees in question. If there was such a common-law relationship, then the Board would look at the specific facts of the case to determine if the putative joint employer “possesses sufficient control over employees’ essential terms and conditions of employment to permit meaningful collective bargaining.”
Business groups were outraged by the new Browning-Ferris test and worked diligently to try to get it reversed by whatever means possible. They argued that the NLRB’s new test was something that all businesses should be concerned about and that it would kill major aspects of the American economy. However, despite the parade of horribles predicted by the business community, the Board applied the new rule in a measured way, and the sky did not fall. In the two years since the Browning-Ferris decision, there have been nine decisions throughout the country by Regional Directors of the NLRB that have used the new test in a joint employer analysis. These cases involved the relationships between construction companies, security and detention guards, casino employees, and employees in the airline industry.
In four of those decisions, the Regional Director found that a joint employer relationship existed. In three of those decisions, the Regional Director found no joint employer relationship. And in three of the decisions, the airline employers argued that they were joint employers in order to argue that they were under the Railway Labor Act and not the NLRA, but the issue was found to be irrelevant. During the two-year period, only one Board case made a determination regarding the joint employer relationship, when it found that a construction company and staffing company were joint employers.3
Despite the lack of any negative effects stemming from the Browning-Ferris decision, in its December 14 Hy-Brand decision, the NLRB overruled its precedent and returned to the previous standard. The decision was a surprise for several reasons. First of all, other than political considerations, there was little reason to reconsider Browning-Ferris so soon. Second, the Hy-Brand case involved the question of two companies acting as a single employer, not joint employers. Indeed, the parties in the case never asked the Board to reconsider its Browning-Ferris precedent, because it did not matter for the disposition of the case. Third, the Board did not solicit briefs or otherwise make the public aware that it was reconsidering Browning-Ferris so that its decision could be fully informed by all interested parties. The dissenting Board Members explain that “not surprisingly, a deeply flawed process leads to a deeply flawed result.” Unfortunately, we already know what the results will be from the Board returning to its previous standard: workers will continue to have little voice in the workplace.
Notes
Airborne Express, 338 NLRB 597, fn. 1 (2002).
TLI, 271 NLRB 798, 799 (1984).
Retro Environmental Inc./ Green Jobworks, LLC, 364 NLRB No. 70 (2016).
TAGS: NLRB, NATIONAL LABOR RELATIONS BOARD, JOINT EMPLOYER STANDARD, BROWNING-FERRIS

The White House has formally rolled back one of the Obama administration's most ambitious attempts to rewrite federal labor law to benefit unions, the so-called joint employer rule.
The Trump administration on Sunday said that businesses shouldn't be held liable for violations by other companies if all they share is a corporate brand.
The Obama administration had sought to make franchiser corporations such as McDonald's legally responsible for workplace violations by their franchisees, even if the latter were legally independent businesses. The previous administration based this on the theory that a corporation was a "joint employer" with the other company even if the former only had "indirect control" over the latter company's policies.
Trump administration has been working to roll back the "joint employer" rule since President Trump took office. The Labor Department on Sunday issued an official rule that corporations were only liable when they had "direct control" over the other company's policies. The administration clarified that to be joint employers, both businesses had to be able to: hire or fire an employee; have control over their work schedule; control the workers' pay; and maintain the workers' employment records.
"This final rule furthers President Trump’s successful, government-wide effort to address regulations that hinder the American economy and to promote economic growth,” said Labor Secretary Eugene Scalia. The rule will go into effect in 60 days.
Business groups had staunchly opposed the Obama administration effort, saying it would push many corporations out of franchising altogether rather than risk the additional liability. Unions had cheered the Obama rule since it made corporations more vulnerable to pressure campaigns and organizing efforts.
The Trump administration said the Obama administration's "indirect control" standard was far too vague.
"The changes in this final rule break down barriers that keep companies from constructively overseeing, guiding, and helping their business partners,” said DOL Wage and Hour Division Administrator Cheryl Stanton.
The National Labor Relations Board, the main federal labor law enforcement agency, late last year, settled a long-running "joint employer" case against McDonald's Corporation by announcing the company was not a joint employer with its franchise restaurants. The case had been launched in 2013 by the Obama administration.
Posted by Betsy Combier at 6:37 AM No comments: