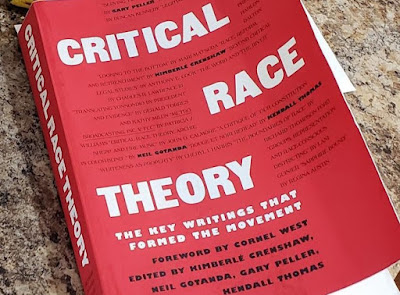 The latest defense for teaching our children to be racially divisive? It’s free speech!

They derided as “un-American” laws passed by states such as Texas, Florida, Idaho, Oklahoma, Arkansas and New Hampshire that prohibit public schools from promoting the core principles of critical race theory, including race essentialism, collective guilt and state-sanctioned discrimination.

These authors imagine themselves the steady hand in a grandiose morality play, defending liberal-democratic freedoms against the threat of illiberalism, wherever it comes from.

But in practice, they are enablers of the worst ideologies of the Left and would leave American families defenseless against them. Their three core arguments — that critical race theory restrictions violate “free speech,” that state legislatures should stay out of the “marketplace of ideas,” and that citizens should pursue civil-rights litigation instead — are all hollow to the core.

In reality, they would usher in the concrete tyrannies of critical race theory, which explicitly seeks to subvert the principles of individual rights and equal protection under the law. Despite the superficial ideological differences between the four authors, they serve a single function: to prevaricate, stall and run interference for critical race theory’s blitz through American institutions.

The president of the nation’s second-largest teachers union is taking a strong stand against a recent spate of laws that restrict public-school lessons on racism, vowing legal action to protect any member who “gets in trouble for teaching honest history.”

Randi Weingarten, president of the American Federation of Teachers, warned in a speech Tuesday that conservative lawmakers, pundits and news sites are waging a “culture campaign” against critical race theory. The theory is a decades-old academic framework that asserts racism is woven into the history and thus the present of the nation, helping shape how institutions and systems function.

In her remarks, Weingarten said that critical race theory is not taught in U.S. elementary, middle and high schools. The theory is taught only in law school and in college, she said.

“But culture warriors are labeling any discussion of race, racism or discrimination as [critical race theory] to try to make it toxic,” Weingarten told a virtual professional development conference for union members. “They are bullying teachers and trying to stop us from teaching students accurate history.”

What is critical race theory, and why do Republicans want to ban it in schools?

Republican-led legislatures — driven by intense conservative advocacy and media coverage inveighing against critical race theory — have sought to restrict what teachers can say about race, racism and American history in the classroom. At least five states, including Arkansas, Tennessee and Texas, have passed bans on critical race theory or related topics in recent months. Conservatives in nearly a dozen other states are pushing for similar legislation.

According to Weingarten, her organization is already “preparing for litigation [to counter these laws] as we speak” — although her spokesman, Andrew Crook, said the union has yet to identify specific targets. Weingarten said that the American Federation of Teachers, which has about 1.7 million members, has “a legal-defense fund ready to go.” Crook said this fund — specifically meant for lawsuits related to critical race theory bills — totals $2.5 million and comes in addition to the $10 million that the American Federation of Teachers makes available to fund lawsuits annually.

Weingarten also called for reopening all classrooms next year and announced that the American Federation of Teachers is dedicating $5 million to a “back-to-school campaign” to help ensure in-person learning is safe. She called the coronavirus vaccines “game changers” and said 90 percent of her union membership been vaccinated.

“Schools can reopen this fall in person, five days a week, with mitigation measures, ventilation upgrades and social, emotional and academic supports for students,” she said.

The furor over critical race theory, which is rapidly consuming the nation as the latest front in America’s culture wars, has its origins in the summer of 2020 and the killing of George Floyd by Minneapolis police.

Many school districts nationwide were already pursuing equity initiatives when Floyd died. But his death — and subsequent national demonstrations against systemic racism — fueled a fresh round of efforts from school officials to promote racial justice by reexamining the role of police, holding bias trainings for employees and reconsidering the way that history is taught.

But it also generated a growing backlash. Conservative activists have seized on images of assignments or short clips of video classes to argue that teachers are indoctrinating students with critical race theory, which they call divisive and inappropriate for schoolchildren.

Even those who acknowledge that critical race theory is not actually being taught to students warn that school systems’ attempts to grapple with concepts such as systemic racism and white supremacy will negatively affect children by trickling through to the classroom and teaching students to view one another solely in terms of race. Detractors also insist that White boys and girls in public school today are learning to hate themselves as historical oppressors.

But in her speech, Weingarten argues the opposite — that school systems will harm children by failing instruct them fully about the darker parts of America’s history. The new laws limiting what educators can say about racism will “knock a big hole” in students’ understanding of the nation and the world, Weingarten said.

“We want our kids to have an education that imparts honesty about who we are,” she said. “We want to raise young people who can understand facts, study the truth, examine diverse perspectives and draw their own conclusions.”

Weingarten’s advocacy comes shortly after the National Education Association, the country’s largest teachers union, passed a resolution asking its members to “fight back against anti-[critical race theory] rhetoric.” The resolution also declared that, in teaching topics including social studies and history, “it is reasonable and appropriate for curriculum to be informed” by critical race theory.