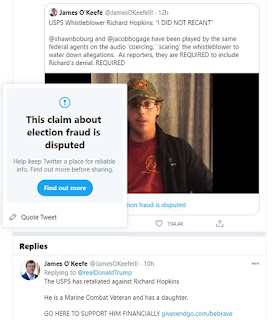 See the picture above and listen to the Youtube video (from SKY news Australia):

and you can donate to Mr. Hopkins here: https://givesendgo.com/bebrave

On that page is the headline and story:

THE "whistleblower" mailman who made claims about ballot tampering in Pennsylvania has insisted he's NOT recanted his allegation - while the Trump campaign sued over the result in battleground Michigan.

Postal worker Richard Hopkins, 32, appeared in a video on Tuesday to insist that he's sticking by his claims of mail-in vote fraud - just hours after Democrats on the House of Representatives Oversight Committee claimed he'd "completely" recanted his allegation.

"My name is Richard Hopkins and I am a former US Marine and I worked for the United States Postal Service in Erie, Pennsylvania. I am willing to testify under oath that my supervisors ordered workers including myself to deliver ballots received after November 3rd in order to "back date" so they would still be accepted in the 2020 Presidential Election. I made the difficult decision to risk everything in my life to come forward with this information of extreme wrongdoing by the Post Office. I am uncertain of what the future holds for me but I felt the public had a right to know what is really going on.Your donations are going to help me now that I have been put on unpaid leave from my job at USPS and have been ostracized by most of my coworkers. I hope to get a new start in a place I feel safe and and continue supporting my children while I find out what comes next. The Post Office has already been threatening my employment. I am scared for myself, my family and those closest to me.Thank You, James O'Keefe and Project Veritas for letting me tell my story when others wouldn't. Please support me as I go forward with this battle."

Is this a scam? Who is telling the truth?

I do not know. I know that I saw the picture at the top of this page when I went on to my Twitter account, and I am not ok with anyone stopping me from seeing what someone has said but some nameless person doesn't like it.

I think that no matter what your political party is, censoring a whistleblower - if that is indeed what happened - for speaking out about election fraud is wrong, despicable, and disheartening.

I am not a legislator, but if I was, I would immediately create a bill to give criminal consequences for censorship.

Editor, Inside 3020-a Teacher Trials

By
Shawn Boburg and
Jacob Bogage

A Pennsylvania postal worker whose claims have been cited by top Republicans as potential evidence of widespread voting irregularities admitted to U.S. Postal Service investigators that he fabricated the allegations, according to three officials briefed on the investigation and a statement from a House congressional committee.

Richard Hopkins’s claim that a postmaster in Erie, Pa., instructed postal workers to backdate ballots mailed after Election Day was cited by Sen. Lindsey O. Graham (R-S.C.) in a letter to the Justice Department calling for a federal investigation. Attorney General William P. Barr subsequently authorized federal prosecutors to open probes into credible allegations of voting irregularities and fraud before results are certified, a reversal of long-standing Justice Department policy.

But on Monday, Hopkins, 32, told investigators from the U.S. Postal Service’s Office of Inspector General that the allegations were not true, and he signed an affidavit recanting his claims, according to officials who spoke on the condition of anonymity to describe an ongoing investigation. Democrats on the House Oversight Committee tweeted late Tuesday that the “whistleblower completely RECANTED.”

Hopkins did not respond to messages from The Washington Post seeking comment through his social media accounts, family members and phone messages earlier this week. But in a YouTube video he posted Tuesday night, he denied recanting. “I’m here to say I did not recant my statements. That did not happen,” he said.

The reversal to investigators comes as Trump has refused to concede to President-elect Joe Biden (D), citing unproven allegations about widespread voter fraud in an attempt to swing the results in his favor. Republicans held up Hopkins’s claims as among the most credible because he signed an affidavit swearing that he overheard a supervisor instructing colleagues to backdate ballots mailed after Nov. 3.

The Trump campaign provided that affidavit to Graham, who in turn asked the Justice Department and FBI to launch an investigation.

The Trump campaign also cited reports of the allegation in a federal lawsuit filed Monday against Pennsylvania election officials that seeks to prevent them from certifying the states’ election results.

Tim Murtaugh, a Trump campaign spokesman, said Hopkins’s allegations are just a small part of the campaign’s assertions in the Pennsylvania lawsuit, adding, “We don’t know what kind of pressure he has been under since he publicly made those statements.”

The Justice Department and Graham did not immediately respond to requests for comment Tuesday.

The Erie postmaster, Rob Weisenbach, called the allegations “100% false” in a Facebook post and said they were made “by an employee that was recently disciplined multiple times.”

“The Erie Post Office did not back date any ballots,” Weisenbach wrote.

The Postal Service inspector general’s office informed members of Congress in a briefing on Tuesday that Hopkins had recanted his allegations, according to a congressional aide. The investigators first interviewed Hopkins on Friday, the aide said.

Hopkins’s allegations, without his name, were first aired last week by Project Veritas, an organization that uses deceptive tactics to expose what it says is bias and corruption in the mainstream media. Hopkins agreed to attach his name to the allegations late last week. He was instantly celebrated by Trump supporters.

Project Veritas founder James O’Keefe on Saturday hailed Hopkins as “an American hero” on Twitter. A GoFundMe page created under Hopkins’s name had raised more than $136,000 by Tuesday evening, with donors praising him as a patriot and whistleblower. The fundraising page was removed by GoFundMe after this story was published Tuesday, a spokesman for the platform said.

“Your donations are going to help me in the case I am wrongfully terminated from my job or I am forced into resigning due to ostrizization [sic] by my co-workers,” the page states. “It will help me get a new start in a place I feel safe and help me with child support until I am able to get settled and get a job.”

A spokesman for GoFundMe, Bobby Whithorne, said in a statement that the money raised on the site was “not disbursed and Hopkins never had access to the funds.”

Separately, on Monday Project Veritas announced it was offering a “$25,000 reward” for “first hand election fraud tips in Pennsylvania.” Late Tuesday, O’Keefe claimed to have recordings of agents questioning Hopkins and said that he was pressured to sign a document he did not understand.

The Postal Service said in a statement over the weekend that it had referred Hopkins’s allegations to the U.S. Postal Inspection Service and the Office of Inspector General.

The Postal Inspection Service declined to comment on Tuesday morning, referring questions to the Office of Inspector General. A spokeswoman for that office, Agapi Doulaveris, said it was still “looking into the matter” Tuesday afternoon and declined to elaborate.

Hopkins was escorted out of his workplace on Monday afternoon and told not to return until the investigation was completed, according to one of the officials familiar with the probe.

A page on the social networking site LinkedIn that matches Hopkins’s name and other biographical details says he served in the Marine Corps from 2007 to 2012. Hopkins subsequently held numerous jobs for short periods of time, including as a nurse’s aide and as an employee at a fracking company in Texas, according to a Facebook profile. The Facebook page says he became a letter carrier in Erie in August 2018.

Posted by Betsy Combier at 7:37 AM