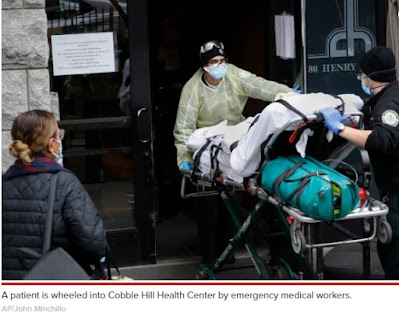 It seems that politics takes precedence over needless deaths due to COVID-19 in New York. Cuomo's malfeasance must be addressed in full.

Remove Governor Cuomo from his position.

JOHN WHITTAKER, jwhittaker@post-journal.com, May 13, 2021
State Senate probe of Gov. Andrew Cuomo’s handling of COVID-19 in nursing homes is taking a back seat to the Assembly’s impeachment inquiry for Cuomo.

Sen. Rachel May, D-Syracuse, made the statement in response to a question by Sen. Sue Serino, R-Hyde Park, in regard to a statement in March by Sen. James Skoufis, D-Newburgh. Skoufis had told The New York Post he would consider a probe led by the Senate Investigations Committee, in coordination with the Senate Aging Committee.

Serino asked May the status of that investigation during a Senate Aging Committee meeting on Tuesday.

“My understanding is the Assembly’s Impeachment inquiry took precedence over that, so we are waiting for the various investigations that are ongoing, including an FBI investigation to run their course,” May said. “That’s my understanding.”

Serino’s request came after May denied Serino’s motion for the Aging Committee to issue a subpoena for Dr. Howard Zucker, state health commissioner, to appear before the Aging Committee to discuss a Feb. 10 phone call between Democratic lawmakers and Cuomo administration staff members during which Melissa DeRosa, secretary to Cuomo, said the administration froze and admitted withholding information about nursing home deaths from state legislators who had been requesting the information for months.
“New Yorkers deserve absolute transparency on this issue,” Serino said. “Yet to date the committees that can take action to get to the bottom of how and why decisions were made that impacted nursing home residents during the pandemic have refused to leverage their full power to do that. You yourself come from the world of academia, Madame Chair.”

“At the very least don’t you think we owe it to those who have been impacted to perform a complete top to bottom review of the state’s handling of the COVID crisis in our nursing homes? Without that, we can’t set effective state policy and we can’t be fully prepared going forward.”

May denied the request, ruling the motion out of order before giving Serino a chance to appeal. State Sen. George Borrello, R-Sunset Bay, and Aging Committee member seconded Serino’s motion.

“We have the power here to do this now,” Borrello said. “Rattling sabers in front of TV cameras is not where we get this done. We can get it done here in Albany with this committee by approving this motion so that we can have a subpoena issued to have Dr. Zucker, Melissa DeRosa and everyone else appear before this committee. Let’s talk about this partial transcript, this FOIL request that was denied. There are several missing minutes from that transcript which really reminds me of another recording where several minutes were missing — and certainly that’s the Watergate scandal that brought down an entire presidency.”

Serino filed a Freedom of Information Law request for a transcript of the Feb. 10 meeting. That request was denied in part because the governor’s office issued a transcript of the event. Serino has argued that the denial implies that the meeting recording must differ in a way substantial enough to set it apart from the transcript that was readily released, and has appealed the FOIL denial.

“As chair, it is my prerogative and I’m going to rule this motion out of order pursuant to Rule 7, Section 2,” May said. “I also will mention that having been part of that conversation that the transcript is quite accurate … There’s nothing missing that I’m aware of from that transcript. In any case, I rule it out of order.”

Posted by Betsy Combier at 6:14 AM