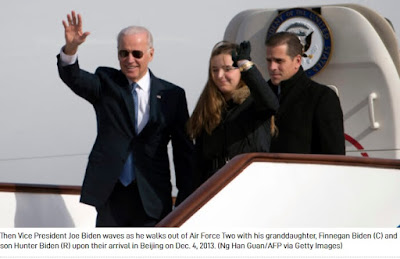 The Epoch Times has detailed the Hunter Biden Scandal for many months. Everyone should read this.

Hunter Biden’s business associates spoke candidly in emails about Hunter Biden’s role in the business, particularly as it related to foreign ventures, apparently viewing the Biden name as a form of “currency,” and bragging that they had a “direct…pipeline” to the Obama-Biden Administration.

Biden’s campaign and Biden have disputed some of the allegations, with Biden saying that it’s a “smear campaign” in remarks delivered over the weekend.

“It’s now been four days since The Post dropped the first Hunter Files story, and neither Joe nor Hunter has disputed a single material fact,” Ahmari said on Twitter. “The easiest thing they could do is to say, ‘That laptop isn’t ours, Hunter didn’t send/receive those e-mails.’ Yet, they haven’t done that.”

“Anyone who looks at The Post’s Twitter feed can’t even see the tweets about the Biden stories, which have been replaced by messages saying, ‘This Tweet is no longer available,'” the Post wrote on Oct. 16.

Both Twitter and Facebook have faced a bevy of criticism this week after the Post’s initial report on Hunter Biden was barred from being shared on Twitter and its reach being limited on Facebook.

That article, which used alleged emails that were sourced from a laptop, showed communication between Hunter Biden, son of Democratic presidential nominee Joe Biden, and a Ukrainian energy company adviser. Hunter Biden’s work at Burisma Holdings, a Ukrainian gas company that was started by an oligarch long accused by Ukrainian officials of corruption, was the focus of President Donald Trump’s impeachment inquiry and trial beginning last year.

Previously, Twitter said the newspaper’s articles violated the social media website’s hacked materials policy. The Post disputed the company’s assertions, saying: “Information in the reports came from data extracted from a MacBook Pro laptop that a Delaware repair shop owner has said was dropped off in April 2019 but never picked up.”

A Facebook executive said last week that it would limit the reach of the article after fact-checkers determine the authenticity of the claims.

President Donald Trump and other top Republicans have now accused Twitter of engaging in censorship and election interference.

The move prompted the Senate Judiciary Committee to announce that it will vote to subpoena Twitter CEO Jack Dorsey about alleged election interference to support Biden’s candidacy.

The committee said it “believes that Twitter has violated [the Federal Employees’ Compensation Act] and the Commission’s Regulations by making corporate in-kind contributions to Biden for President,” according to the complaint. Fox News first reported on the filing on Oct. 16.

There have also been suggestions from Trump and other GOP lawmakers that under Section 230 of the Communications Decency Act, Twitter should be considered a publisher and therefore subject to lawsuits.

Biden campaign spokesman Andrew Bates told news outlets last week that Biden had “carried out official U.S. policy toward Ukraine and engaged in no wrongdoing,” and that some “Trump administration officials have attested to these facts under oath.”

Posted by Betsy Combier at 7:28 AM