Priests, Bishops, ex-Cardinals, (or whatever title a person of the Church has), if they abuse kids must be held accountable for their actions. It's that simple. 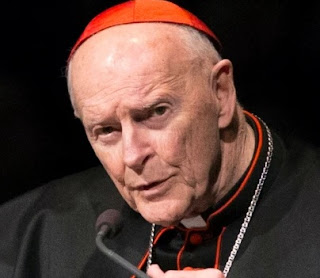 Lia Eustachewich, NY POST, July 23, 2020
Disgraced ex-Cardinal Theodore McCarrick allegedly ran a sex ring out of his New Jersey beach house — where one victim claims he was molested by him and three other priests, according to a new lawsuit.


The victim — “Doe 14” — says the alleged abuse began when he was 14 during overnight stays at McCarrick’s Sea Girt home in 1982.
“In the night, with the assistance of others, McCarrick would creep into this kid’s bed and engage in criminal sexual assault of him, whispering, ‘It is OK,'” Jeff Anderson, the attorney for the now-53-year-old victim, said at a virtual press conference Wednesday.
Other priests allegedly served as part of a “crew” of procurers of young boys for then-Bishop McCarrick, who “assigned sleeping arrangements, choosing his victims from the boys, seminarians, and clerics present at the beach house,” the suit says.
Some of the other boys who were allegedly brought to McCarrick’s home were “assigned to different rooms and paired with adult clerics,” according to the complaint.
The victim claims he was also abused at the beach house by priests Gerald Ruane, Michael Walters, and John Laferrera. The three men were among a list of 188 clergy members in New Jersey accused of sexual misconduct, NJ.com reported. Ruane is dead, while the other two were listed as “permanently removed from ministry.” 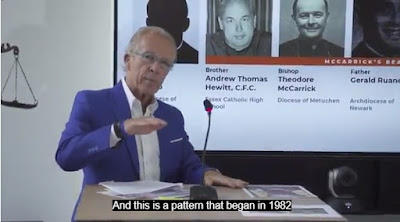 The suit was filed Tuesday night in New Jersey Superior Court in Middlesex County against the Diocese of Metuchen, the Archdiocese of Newark — where McCarrick served as bishop and archbishop, respectively — and several New Jersey schools the victim attended.
The victim is described as having been raised in a devout Roman Catholic family and a former student at St. Francis Xavier in Newark and Essex Catholic in East Orange.
He also claims he was sexually abused as an 11-year-old altar boy at St. Francis Xavier by the Rev. Anthony Nardino, who was employed at the school, and later molested by Brother Andrew Thomas Hewitt at Essex Catholic, where he was principal.
Hewitt died in 2002, according to an online obituary. Nardino, who has not been publicly accused before, has left the ministry, according to NJ.com.
Anderson said decades of alleged sexual abuse have been covered up by the Catholic Church.
“All of it cloaked in papal power,” he said.
Last year, Pope Francis defrocked McCarrick, 90, after a church investigation found he sexually abused minors and adult seminarians.
Sexual abuse allegations against McCarrick have been leveled before, including by James Grein, the first child he baptized. Grein said McCarrick — known as Uncle Ted — began molesting him at age 11.
The Archdiocese of Newark didn’t immediately comment.
Its spokeswoman, Maria Margiotta, told NJ.com, “It would be inappropriate to discuss or comment on matters in litigation. The Archdiocese of Newark remains fully committed to transparency and to our long-standing programs to protect the faithful and will continue to work with victims, their legal representatives and law enforcement authorities in an ongoing effort to resolve allegations and bring closure to victims.”
McCarrick’s lawyer didn’t immediately return a message.
Anthony Kearns III, spokesperson and chancellor for the Diocese of Metuchen, said the diocese was committed to preventing future sexual abuse.
“While we have not yet received the complaint, our prayers are with all survivors of abuse, today and always, and we stand with them in their journey toward healing and hope,” he said. “With God’s grace, all survivors of abuse, particularly those wounded by members of the Church, will continue to heal and move forward.”
Ex-cardinal sent cash to church leaders during abuse probe: report
Vincent Barone, NY POST, December 27, 2019
Disgraced former cardinal Theodore McCarrick sent hundreds of thousands of dollars in church funds to Catholic leaders as he faced mounting sexual abuse allegations, according to a report.
McCarrick since 2001 sent $600,000 in checks to high-ranking church officials — including several directly in charge of assessing claims against him — all while the Catholic church faced criticism for failing to act on McCarrick’s alleged misbehavior, an investigation by the Washington Post found.
As McCarrick doled out the vast sums of cash, he rose to prominence, becoming entrenched at the highest levels of the U.S Catholic Church despite accusations dating back to 2000.
While serving as archbishop, McCarrick pulled money from an account at the Archdiocese of Washington. Recipients of McCarrick’s generosity included Pope John Paul II and Pope Benedict XVI, who received $90,00 and $291,000, respectively, according to the report.
McCarrick was defrocked in February after Vatican officials found him guilty of soliciting for sex while hearing confession and of “sins” with both minors and adults. He was the first cardinal to have been defrocked.
He had previously served as a major fundraiser for the Vatican and acted as a spokesman for US bishops when they undertook a no-tolerance policy for sexually abusive priests in 2002.
The decision made McCarrick the highest-ranking Catholic clergyman to be pushed out of the priesthood through the church’s sex-abuse scandals.
Clerics denied to the Washington Post that the money had any impact on the church’s decision-making, describing the funs as “customary gifts among Catholic leaders” during Christmas time or as a “gesture of appreciation.”
A spokesman for Cardinal Leonardo Sandri, who received $6,500 from McCarrick, told the paper that the gifts “never had any effect on the Cardinal’s decision-making as an official of the Holy See.”  The Vatican declined comment.
An attorney for McCarrick, Barry Coburn, declined to comment on the findings of the Washington Post investigation. In the past, McCarrick has denied wrongdoing.
McCarrick was ordained as a priest in New York in 1958 and served as parochial vicar for Blessed Sacrament Parish in Manhattan until 1981.
Disgraced ex-cardinal’s letters to alleged sex abuse victims revealed
Posted by Betsy Combier at 11:34 AM