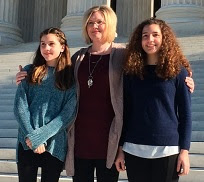 Monumental decision affirms the right of parents to direct the education of their children.

WASHINGTON, D.C. — The decision of the Supreme Court in favor of the plaintiff in Espinoza v. Montana Department of Revenue validates a parent’s constitutionally protected right to direct the education of their children.

“The weight that this monumental decision carries is immense, as it’s an extraordinary victory for student achievement, parental control, equality in educational opportunities, and First Amendment rights,” said Jeanne Allen, the founder and chief executive of the Center for Education Reform (CER).

“For many families, Espinoza not only provides the potential for expanded opportunities for them to educate their children, including the choice of religious education, but also the right to decide what they believe is the most effective way to do so.”

As the plaintiffs argued, and CER reinforced in its amicus brief, denying parents their school of choice because of its religious nature — on the basis of Blaine Amendments enacted by many states decades ago — injures parents and children by violating bedrock constitutional principles. This is especially true for low-income families who are bound by their zip codes and financial barriers to chronically substandard schools. The Espinoza victory represents monumental progress toward reversing damage that has been done for nearly 150 years and which states can now address.

Former Solicitor General Paul Clement, author of CER’s amicus brief, adds, “In some states, legislation may be sufficient to enjoin application of a Blaine Amendment. In other states, an advisory opinion (from the Attorney General or state supreme court) may be the preferred course. In still other states, it may be necessary to bring a declaratory judgment action seeking a court ruling. And a state’s particular law and circumstances may call for some combination of these efforts — even all three.”

In the coming days, CER will be reviewing the literature as to how states can best proceed given the complexity of the decision.

For more information about Espinoza and the history of the Blaine Amendments, visit CER’s “Blaine” microsite. The site links to, among other things, Jeanne’s interview with Kendra Espinoza and Jeanne’s op-ed with Paul Clement for Time.

JUNE 30, 2020
U.S. Secretary of Education Betsy DeVos released the following statement on the Supreme Court’s landmark decision in the Espinoza v. Montana Department of Revenue case:
"Today’s decision is a historic victory for America’s students and all those who believe in fundamental fairness and freedom. Each and every student needs the freedom to find their education fit, and today the Highest Court in the Land has protected that right by ensuring that families can use taxpayer funds to choose schools that match their values and educational goals, including faith-based schools. I applaud the Court’s decision to assign a manifestation of the 'last acceptable prejudice' to the dustbin of history where it belongs. Montana and other states should be very clear about this historic decision: your bigoted Blaine Amendments and other restrictions like them are unconstitutional, dead, and buried. Too many students have been discriminated against based on their faith and have been forced to stay in schools that don’t match their values. This decision represents a turning point in the sad and static history of American education, and it will spark a new beginning of education that focuses first on students and their needs. I’m calling on all states to now seize the extraordinary opportunity to expand all education options at all schools to every single student in America."