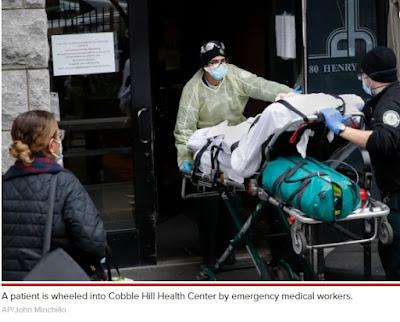 During the past week newspapers in New York and around the world have read about the horrible number of deaths from COVID-19 in nursing homes, which we have documented in previous posts.

In sum, Governor Andrew Cuomo said in a press conference that he knew nothing about what happened to nursing home residents when they tested positive and asked his health commissioner Howard Zucker to tell the public where the person was placed.

Mr. Zucker said that everyone who tested positive was returned to the nursing home and given proper protection from spreading the virus to others, including staff.

The extremely high number of deaths from the virus in NY State's nursing homes is proof that Zucker's statement was a lie. The newly tested positive people were not given proper protections from spreading the virus. Too many people have died, including staff.

On the list of bad management actions that will now follow Cuomo into, we hope, forced retirement from political life, we have the scandal of the Comfort, a Navy hospital ship equipped to take in 500 COVID-19 patients yet had only 62 patients and the Javitz Center with only 134 patients but 1000 beds available.

There will be lawsuits for the next 20 years to remedy these deaths and political mismanagement.

The accountability is all on Governor Cuomo. 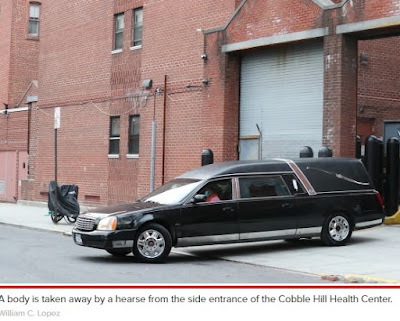 
New York health officials were warned in writing that a Brooklyn nursing home where 55 patients have died of coronavirus was overwhelmed — weeks before it began topping the state’s official list of resident COVID-19 deaths, damning emails show.
Cobble Hill Health Center CEO Donny Tuchman sent a desperate email to state Health Department officials on April 9, asking if there was “a way for us to send our suspected COVID patients” to the hospital built inside the Javits Convention Center or the US Naval hospital ship Comfort — the under-utilized federal medical facilities on Manhattan’s West Side.
“We don’t have the ability to cohort right now based on staffing and we really want to protect our other patients,” Tuchman wrote in a chain of the emails reviewed by The Post.
He was denied.
“I was told those facilities were only for hospitals” to send their overflow patients, Tuchman said.

At the time Tuchman sent his plea, only 134 of the 1,000 beds at the Javits Center were full and the Comfort — which had just been reconfigured to treat up to 500 COVID-19 patients — had a mere 62 on board.
Adding insult to injury, the Navy hospital ship wound up treating just 179 patients before Gov. Cuomo on Tuesday said it was no longer needed.
The Comfort remained docked at Pier 90 with 29 patients on board Friday but was expected to return to its homeport in Norfolk, Virginia, as soon as possible.

Cobble Hill has led all state nursing homes in the number of residents killed by the coronavirus since the state Health Department began releasing those figures last week.


That figure remained stable as of Thursday, the latest date for which statistics were available, and was followed by 51 at Parker Jewish Institute for Health Care and Rehabilitation in Queens.
Kings Harbor Multicare Center in The Bronx, Franklin Center for Rehabilitation and Nursing in Queens, and Carmel Richmond Healthcare and Rehabilitation Center in Staten Island were next, with 45 deaths each.
Tuchman’s April 9 email wasn’t the only time that the state was put on notice about the dire conditions at Cobble Hill.
In an email one day earlier, Tuchman told Health Department officials that the facility had “over 50 symptomatic patients scattered through the building and almost no gowns.”
Tuchman said Cobble Hill had been asking the city’s Office of Emergency Management “daily” for more gowns, but “gotten only a few hundred delivered.”
“There is no way for us to prevent the spread under these conditions,” he wrote in desperation on April 8. “Is there anything more we can do to protect our patients and staff? Thank you for any help you could be.”
Tuchman got a response 20 minutes later, but all it offered was an attachment with advice on how to conserve PPE, the email chain shows.
“Many facilities have built this guidance into their contingency plan in the event of PPE supply shortages and depletion of supplies. Thanks,” a health official wrote.
A follow-up response about two hours later added, “Please be sure to submit your request through the local OEM daily” — even though Tuchman had said he was already doing that.
Tuchman said Friday the shortages of protective gear grew so severe staffers resorted to wearing trash bags as protection — echoing the situation that scandalized Mount Sinai West hospital in Manhattan when The Post exposed the practice there last month.
“This has been a very sad and painful experience,” Tuchman added. “Once the virus gets into the building it is very, very hard to control.”
Cuomo sparked widespread outrage earlier this week when he said that providing private nursing homes with PPE was “not our job,” with Mayor de Blasio, a longtime rival, saying there’s a “moral imperative to protect our seniors.”
Cuomo also said Thursday that any nursing home that can’t provide a coronavirus patient with an “adequate level of care” could ask the Health Department to transfer the patient elsewhere, and Health Commissioner Howard Zucker said he was unaware of any nursing home having made that request.
Under a controversial March 25 order, the Health Department barred nursing homes from refusing admission to “medically stable” coronavirus patients.

In a prepared statement, Health Department spokesman Gary Holmes said, “To be clear: We engaged in conversation with Mr. Tuchman on more than one occasion regarding staffing. He wanted additional help, but stated he was able to meet basic needs under the directive – which included having adequate facilities.”
Holmes also said officials “conducted a focus survey at Cobble Hill and found no deficient practices” and that it would soon be receiving “more than 1,400 gowns and approximately 1,500 face shields.”
“Additionally, as we track inventory for all facilities daily, our records indicate they have more than a week’s supply of N95 masks, two month’s supply of surgical masks, and nearly two week’s supply of gloves,” he added. 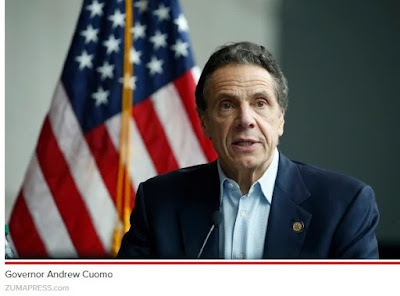 News that Team Cuomo ignored warnings about the nursing-home disaster only confirms that the gov’s call for an investigation is pure deflection. He’s trying to make care facility owners the fall guys for the state’s choices.
The Post reports that a Brooklyn nursing home that’s seen New York’s greatest number of COVID-related deaths (55, on the latest list) wrote the state Health Department on April 8 to plead for help.
Cobble Hill Health Center CEO Donny Tuchman e-mailed four officials to report that his facility had “over 50 symptomatic patients scattered through the building and almost no gowns” and warned, “There is no way for us to prevent the spread under these conditions.”
His closing, in hindsight, is heartbreaking: “Is there anything more we can do to protect our patients and staff? Thank you for any help you could be.”
Someone wrote back 20 minutes later — with a standard attachment offering advice on how to conserve personal protective equipment. (In reply, Tuchman repeated the fact that Cobble Hill didn’t have anything to conserve.)
The concerned CEO made another plea the next day, asking if he could send the home’s suspected coronavirus cases to the field hospital at the Javits Center or the USNS Comfort. No dice, came the answer.
So much for the claims from Gov. Cuomo and his health czar, Dr. Howard Zucker, that overwhelmed facilities just needed to ask for help if handed patients they couldn’t safely handle — thanks to Zucker’s March 25 mandate that all homes accept coronavirus-positive cases.
We expect more damning evidence will surface in the days ahead.
Cuomo has asked Attorney General Tish James to lead an investigation that seems fixed from the start: It will find that nursing homes weren’t remotely prepared to respond to a pandemic.
The real investigation should be into why Zucker insisted on sending coronavirus-positive patients to nursing homes, when it’s been clear from the start that the elderly are most at risk from the virus.
And when any health pro must know, as Rochester’s Hurlbut Care Communities CEO Bob Hurlbut put it this week, that “Physical distancing is nearly impossible in the nursing home environment, due to room sharing and the fact that we provide the most intimate level of care, from brushing teeth to bathing and incontinence care.”
Cuomo himself says the virus spreads in nursing homes “like fire through dry grass.”
Yet the gov refuses to admit any mistakes: “The regulation is common sense: If you can’t provide adequate care, you can’t have the patient in your facility, and that’s your basic fiduciary obligation — I would say, ethical obligation — and it’s also your legal obligation.”
And, says the gov, “it’s not our job” to ensure homes have the supplies they need to keep residents and staff safe. Isn’t that the line that drove Cuomo crazy when President Trump took it?
Now he wants his protégé James — and Zucker’s Health Department — to review the performance of the state’s 600 nursing homes and 500 adult-care establishments? Come on.
Yes, they can find some convincing scapegoats: Again, all too many these institutions were troubled before the crisis. Their profits, and the jobs they provide, bought the political power to get away with it.


And when the pandemic hit, Zucker & Co. actually made things worse — fatally so. It’s madness. 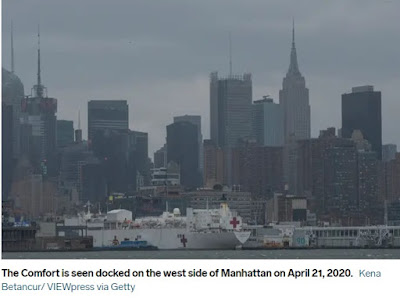 Posted by Betsy Combier at 9:33 AM