Tony Schwartz: A Purpose Beyond Profit 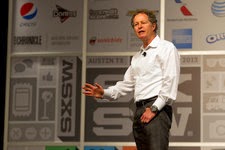 For years, I’ve listened to chief executives of large companies pay dutiful lip service to concepts like corporate social responsibility, investing in the communities they operate in, treating employees as their most precious asset and living their values. Mostly, it comes off as so much canned public posturing — boxes to be checked off, rather than any sort of deep commitment.
My favorite example is from the vision statement of the once-mighty Enron Corporation: “We treat others as we would like to be treated ourselves,” it declared. “We do not tolerate abusive or disrespectful treatment. Ruthlessness, callousness and arrogance don’t belong here.” And what were its top values? “Respect, Integrity, Communication and Excellence.”
Seriously?
But compare that with the pledge made in 2010 byUnilever and its chief executive, Paul Polman: “We are making sustainable living a driver of everything we do,” the company said. With these words, Unilevermade specific commitments, including to sustainably source 100 percent of its agricultural raw materials and to make hand washing a habit for 1 billion people around the globe — both goals to be achieved by 2020, with regular progress reports along the way.

Over the past 15 years, I’ve spent much of my time working with and listening to executives at large companies. In the past year, something palpable has begun to change. It’s still more nascent than tectonic, but the shift feels unmistakable. At the risk of overstating it, I want to call it an awakening — an awakening to a larger perspective and a bigger view of the role these companies play in the world.
Last week, I heard John Mackey, co-chief executive ofWhole Foods, get up in front of 900 of his leaders and say that the company’s noble mission should be to change the way the world eats, with the goal of eliminating killers like cancer and heart disease that are so influenced by our diets.
Mr. Mackey went on to describe the range of ways in which the company is trying to bring healthy practices to its own employees, including paying for 400 of them a year to attend a weeklong retreat intended to improve their health. Whole Foods also gives employees financial incentives to score well on biometric assessments of their health, and it recently opened its first medical and wellness clinic, where employees can receive primary medical care at no cost, along with health coaching. In the stores themselves, Whole Foods recently instituted a rating system to identify the healthiest foods for customers.
Mr. Mackey is a pioneer in thinking about the role that companies and their chief executives ought to play beyond the bottom line. But he’s got more and more fellow travelers. I first met Mr. Mackey a year ago at a conference organized by Conscious Capitalism, the organization he co-founded. One of its core tenets is that every business needs a higher purpose that includes, but goes beyond, making money. A second is that companies have an obligation not just to create value for their shareholders but for all stakeholders, including employees, vendors, communities and even the planet. A third tenet is that leaders themselves ought to be guided by their own higher purpose.
More than 180 chief executives attended the “Conscious Capitalism C.E.O. Summit” last fall. Speakers at the most recent event included the chief executives of companies like Hyatt Hotels, Home Depot and Panera Bread. Organizers expect well over 200 chief executives this year.
It’s easy to be cynical about the motives of leaders who profess a purpose beyond profit and a desire to take better care of their varied constituencies, but I find myself feeling hopeful. At the most practical level, doing so is a form of enlightened self-interest. The evidence grows, for example, that when companies invest in better meeting the needs of their employees — including health and wellness, feeling valued, and serving a purpose beyond their own self-interest — the results show up at the bottom line.
A 2012 survey of 60,000 employees at 50 companies around the world, conducted by the consulting firm Towers Watson, found that the organizations that invested most in the sustainability of their employees generated nearly three times the operating margins of those who invested the least.
Higher consciousness, as treacly a phrase as it is, simply means the capacity to be conscious of more and to exclude less. Conscious capitalism recognizes a wider world and a longer view. Conscious leaders have the courage and the vision to see that we live on a planet in peril, that we’re all in this together and that extending our circle of care ultimately pays the highest dividend.

Tony Schwartz is the chief executive of the Energy Project and the author, most recently, of “Be Excellent at Anything: The Four Keys to Transforming the Way We Work and Live.” Twitter:@tonyschwartz
Posted by Betsy Combier at 8:19 PM