From The Answer Sheet by Valerie Strauss: 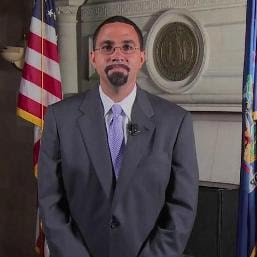 John King (http://www.nysed.gov/)
New York Education Commissioner John King recently started a series of forums co-sponsored with the New York State PTA to talk about the Common Core State Standards — but things didn’t go as planned. At the Poughkeepsie forum a few days ago, audience members were less than polite when they were given little opportunity to speak, and he cancelled other stops on his mini-tour. In this post, award-winning Principal Carol Burris of South Side High School in New York,  talks about what this all means for the reform movement in New York.
Burris has for more than a year chronicled on this blog the many problems with the test-driven reform in New York (here, and here and here and here, for example). She was named New York’s 2013 High School Principal of the Year by the School Administrators Association of New York and the National Association of Secondary School Principals, and in 2010,  tapped as the 2010 New York State Outstanding Educator by the School Administrators Association of New York State. She is the co-author of the New York Principals letter of concern regarding the evaluation of teachers by student test scores. It has been signed by more than 1,535 New York principals and more than 6,500 teachers, parents, professors, administrators and citizens. You can read the letter by clicking here.
By Carol Burris
Thomas Sergiovanni was a renowned international scholar of educational leadership.  In his book, Moral Leadership, he explains the differences between subordinates and followers.  Sergiovanni argued that educational leaders need followers because followers are not led by coercion, but rather by commitment to beliefs, values and ideals.  In a 1990 article for Educational Leadership he wrote:

When followership is established, bureaucratic authority and psychological authority are transcended by moral authority.

The New York State Education Department has lost its moral authority, as defined by Sergiovanni.  That loss was clearly on display at a recent New York State PTA-sponsored hearing on the Common Core in Poughkeepsie, New York.  By the last half hour of the evening, the audience was both boisterous and impassioned, angered because there was limited opportunity to speak. What little time remained for the audience was twice interrupted by Commissioner John King, who had held the floor for an hour and a half.
The miffed King then reacted by cancelling upcoming scheduled forums.  In response to an inquiry about the cancellation by Long Island’s Newsday, King responded:

I was looking forward to engaging in a dialogue with parents across the state.  I was eagerly anticipating answering questions from parents about the Common Core and other reforms we’re moving ahead with in New York State.  Unfortunately, the forums sponsored by the New York State PTA have been co-opted by special interests whose stated goal is to “dominate” the questions and manipulate the forum.”[1]

The people in the audience at the Poughkeepsie forum were teachers and parents.  The common “special interests” of both groups are children.
What occurred in Poughkeepsie is not surprising to those who have followed the course of reform in New York led by John King.  John King was a teacher for only three years—teaching in Puerto Rico, in a private school and in a charter school in Boston.  After his short career as a teacher, he became the co-director of Roxbury Prep, a charter school with fewer than 200 students during his tenure. Five years later, he became the managing director of Uncommon Charter Schools.
In 2000, John King entered the Inquiry Doctoral Program at Columbia University’s Teachers College.  Each Inquiry cohort was small and intimate—about 25 students.  I know the program well—I was a member of the 1999 cohort.  A fellow member of John King’s cohort was the wife of billionaire Jim Tisch, Merryl Tisch, who was appointed to the New York State Board of Regents four years earlier.  King and Tisch took classes together for two years. In April of 2009, Merryl became the Regents’ chancellor.  In September 2009, John King was appointed deputy commissioner of  education. Two years later, John King was appointed commissioner following the abrupt resignation of David Steiner.  It was the meteoric rise of a man who became commissioner at 36 years of age.
King has surrounded himself with bright young people, most of whom like King, have limited or no experience in public education. They are called the Regents Fellows. Their positions are funded by donations, including a million-dollar gift from Chancellor Tisch herself, and nearly a million dollars from Bill Gates.  At a recent gathering of Long Island school leaders, Tisch was asked about the Fellows. She chided the audience, telling them that they should be grateful for the private donations.  The skeptical audience, however, well understood that there is nothing like a million dollar donation to ensure that ‘my will be done.’
‘My will be done’ has been the tone and the tenor of chaotic reform in New York.  In its rush to implement teacher evaluations, the Common Core and new testing, the state leadership has likened it to building a plane in the air.  Cut scores anchored to ridiculously high performance on the SAT caused proficiency scores to plummet.  Students, often in tears, rushed to finish tests that were too difficult and too long. The Common Core Algebra modules are still not finished, even though teachers must teach the course to students now. Rushed APPR plans reviewed by law school students and supervised by a young, former Teach For America grad now Fellow, led to disastrous results such as those of Syracuse, where 40% of the teachers were rated below effective and no elementary or middle school teacher was found to be highly effective.
Syracuse is not alone—other districts have simply chosen to hide their disasters.  The very APPR rating bands themselves produce illogical results, leaving one to wonder if the department can add three, two-digit numbers. The confusion continues. Just a few days ago, the department’s website directed those who wanted information about the parent portal to a telephone number of a sex chat line. From APPR, to the Common Core, to 3-8 testing, the plane being built in the air is falling apart.
As a result, there is no followership—no commitment among parents, teachers and principals to the values and ideals of reform.  The interest in the Common Core has turned to tepid support at best. What remains is compliance.  Even that compliance, however, is waning, as evidenced by the Poughkeepsie hearings, the Buffalo forum on testing that drew 2500, and the Opt Out movement that is growing exponentially around the state.  The moral leadership that is needed to navigate through the seas of sweeping change is not there. The source of authority is at best, bureaucratic.
In the authoritarian world of the Uncommon Charter Schools as described so well by scholar Pedro Noguera here, the rule is “thy will be done.”  In the real and messy world of democracy it is different.  Leaders must listen deeply, learn and respond.  They must be willing to consider alternative courses, and even in loud crowds, hear truth. In teaching, we attempt to perfect the skill known as “monitor and adjust.”  You can only master that skill by truly engaging learners.
In many ways, it is a sad tale.  One might imagine that if John King had first been a principal of a New York City public school, or the superintendent of a district, he would have become skilled in dealing with emotional and boisterous groups.  In doing small-scale reforms in a district, he could have practiced effective pacing. John King would know, as Sergiovanni taught, that the heart of good leadership is the development of followership.  Without followership, no reform has a chance.
[1] A Newsday reporter sent me this quote for response on October 12.
Posted by Betsy Combier at 7:25 PM