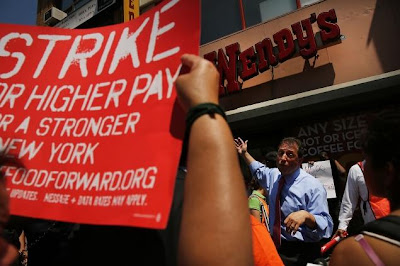 As workers struggle, a chance for unions to reclaim their role in American society

Labor is in crisis.

The percentage of unionized workers in America is at an all-time low, 6.6%, and mayors and governors chipping away at the social safety programs that unions helped to create now treat them as at best a relic and at worst the cause of our fiscal woes.

Even as politicians talk generically about “middle-class issues,” attacks on workers have gone mainstream. At the very moment when class seems to matter most, the language for discussing it has dropped from our vocabulary — and pundits and politicians who dare speak about it are accused of promoting “class warfare.”

Yet most of our transformative social reforms have involved unions, and a weak labor movement hurts our democracy.

When members of the Missouri Volunteers’ Turner Brigade marched to stop the plundering of Camp Jackson by secessionists on the eve of the Civil War, they carried a banner depicting a workman’s hammer smashing the shackles of slavery.

When Mother Jones organized the Children’s Crusade in 1903, a march from Philadelphia to President Theodore Roosevelt’s home in Oyster Bay, L.I., calling for the abolishment of child labor, she struck a blow for the rights of all children, universal education and workers’ health and safety. When garment workers traumatized by the 1911 Triangle Shirtwaist Factory fire won precedent-setting statewide fire safety laws, they protected people of all classes.

The largest union surge in American history, the 1930s, saw a slew of New Deal reforms, including Social Security, that set the stage for an expanded American middle class that understood these “entitlement s” as rights.

Organized labor did not always lead these efforts. Sometimes it was dragged kicking and screaming into the fray. But when unions did get behind an issue, they moved the national agenda in important ways, providing institutional, organizational, financial, and, of course, political support.

The 1963 March on Washington, where the Rev. Martin Luther King Jr. gave his famous “I Have a Dream” speech, was co-sponsored, supported and funded by the United Auto Workers, among other unions.

In short, labor has helped make America a better place to live and work.

Social transformations in America have always moved forward in fits and starts, but efforts at reforms finally succeed when working people gather their resources and fight back during economic, political and social crises.

We are now living through what may be one of these transformational moments, as workers find themselves in a desperate place, no longer sharing in the economy’s gains as they’ve gone without a real raise since 1979. They are working longer hours just to preserve what they once had. The effective unemployment rate in the United States hovers over 14%, and the income disparity between rich and poor is now larger than it was during the Gilded Age.

Nearly 30% of the workforce is now made up of day laborers, contract workers, freelancers and consultants. Women only make 69 cents for every dollar a man makes. The income gap between black and white workers is at a 25-year high. In the shadows of the American economy stand 11 million undocumented workers and their families.

Workers today are politically unrepresented. In the wake of the worse economic collapse since the Great Depression, major companies like GM and AIG were bailed out, and banks were bolstered. Where was President Obama’s WPA or his Wagner Act? His most powerful economic policymakers are all Wall Street stalwarts.

The good news is that we have been here before, as rumors of labor’s demise have often been exaggerated. It is in moments such as these, when the workers who power our economy have seen their fair share of it slipping away, that new forms of organized labor have emerged to bolster our democracy.

Labor has always reinvented itself, and that reinvention has usually come from the periphery. Today, retail workers, fast-food workers, taxi drivers and freelancers are fighting for justice, waging an uphill battle with employers and with unions for recognition and support.

If history has lessons for us, these hidden workers might just be the force that wakes up a sleeping giant and reignites this democratic movement.

Greenwald, dean and professor at St. Joseph’s College, is co-editor of “Labor Rising: The Past and Future of American Workers.”