Peggy Noonan: The IRS Targeted Conservatives And Violated Their Rights

If the agency didn't know what it was doing, it wouldn't have done it so well.

LINK
by Peggy Noonan
Quickly: Everyone agrees the Internal Revenue
Service is, under current governmental structures,
the proper agency to determine the legitimacy of
applications for tax-exempt status. Everyone agrees
the IRS has the duty to scrutinize each request,
making sure that the organization meets relevant
criteria. Everyone agrees groups requesting
tax-exempt status must back up their requests with
truthful answers and honest information.

Some ask, "Don't conservatives know they have to
be questioned like anyone else?" Yes, they do. Their
grievance centers on the fact they have not been.
They were targeted, and their rights violated.

The most compelling evidence of that is what happened
to the National Organization for Marriage. Its chairman,
John Eastman, testified before the House Ways and
Means Committee, and the tale he told was different
from the now-familiar stories of harassment and abuse.

In March 2012, the organization, which argues the case
for traditional marriage, found out its confidential tax information had been obtained by the Human Rights
Campaign, one of its primary opponents in the marriage debate. The HRC put the leaked information on its
website—including the names of NOM donors. The
NOM not only has the legal right to keep its donors'
names private, it has to, because when contributors'
names have been revealed in the past they have
been harassed, boycotted and threatened. This is a
free speech right, one the Supreme Court upheld in
1958 after the state of Alabama tried to compel the
NAACP to surrender its membership list.

The NOM did a computer forensic investigation and
determined that its leaked IRS information had come
from within the IRS itself. If it was leaked by a worker
or workers within the IRS it would be a federal crime,
with penalties including up to five years in prison.

In April 2012, the NOM asked the IRS for an investigation.
The inspector general's office gave them a complaint
number. Soon they were in touch. Even though the leaked document bore internal IRS markings, the inspector
general decided that maybe the document came from
within the NOM. The NOM demonstrated that
was not true.
Enlarge Image 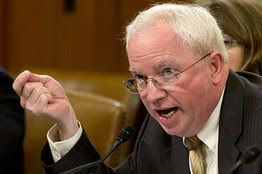 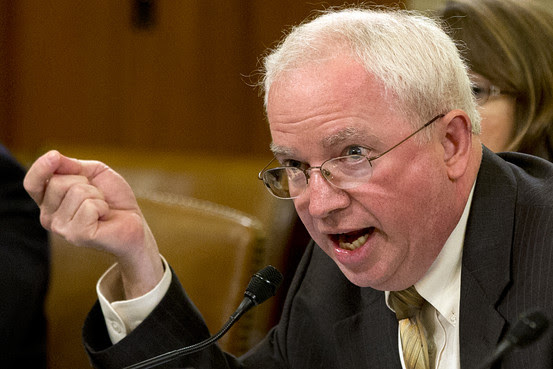 John Eastman, National Organization for Marriage chairman, testifying before Congress about the IRS's political targeting of his group, June 4.

For the next 14 months
they heard nothing about
an investigation. By
August 2012, the
NOM was filing
Freedom of Information
Act requests trying to
find out if there was
one.

The IRS stonewalled. Their "latest nonresponse
response," said Mr. Eastman, claimed that the
law prohibiting the disclosure of confidential tax
returns also prevents disclosure of information
about who disclosed them. Mr. Eastman called
this "Orwellian."
He said that what the NOM experienced "suggests
that problems at the IRS are potentially far more
serious" than the targeting of conservative
organizations for scrutiny.
In hearings Thursday, Rep. Elijah Cummings, a
Maryland Democrat who disagrees with the basic
stand of the NOM, said that what had happened
to the organization was nonetheless particularly
offensive to him. The new IRS director agreed he
would look into it.
Almost a month after the IRS story broke—a month
after the high-profile scandal started to unravel after
a botched spin operation that was meant to make the
story go away—no one has been able to produce a
liberal or progressive group that was targeted and
thwarted by the agency's tax-exemption arm in the
years leading up to the 2012 election. The House
Ways and Means Committee this week held hearings
featuring witnesses from six of the targeted groups.
Before the hearing, Republicans invited Democrats to
include witnesses from the other side. The Democrats
didn't produce one. The McClatchy news service also
looked for nonconservative targets.
"Virtually no organizations perceived to be liberal or
nonpartisan have come forward to say they were
unfairly targeted," it reported. Liberal groups told
McClatchy "they thought the scrutiny they got was
fair."
Some sophisticated Democrats who've worked in
executive agencies have suggested to me that the
story is simpler than it seems—that the targeting
wasn't a political operation, an expression of political preference enforced by an increasingly partisan agency,
its union and assorted higher-ups. A former senior White
House official, and a very bright man, said this week
he didn't believe it was mischief but incompetence. But
why did all the incompetent workers misunderstand their
jobs and their mission in exactly the same way? Wouldn't general incompetence suggest both liberal and
conservative groups would be abused more or less
equally, or in proportion to the number of their
applications? Wouldn't a lot of left-wing groups have
been caught in the incompetence net? Wouldn't we now
be hearing honest and aggrieved statements from
indignant progressives who expected better from their government?
Some person or persons made the decision to target,
harass, delay and abuse. Some person or persons communicated the decision. Some persons executed
them. Maybe we're getting closer. John McKinnon and
Dionne Searcey of The Wall Street Journal reported this
week that IRS employees in the Cincinnati office—those
are the ones that tax-exempt unit chief Lois Lerner accused
of going rogue and attempted to throw under the bus—
have told congressional investigators that agency officials
in Washington helped direct the probe of the tea-party
groups. Mr. McKinnon and Ms. Searcey reported that
one of the workers told investigators an IRS lawyer in Washington, Carter Hull, "closely oversaw her work and suggested some of the questions asked applicants."
"The IRS didn't respond to a request for comment," they
wrote. There really is an air about the IRS that they think
they are The Untouchables.
Some have said the IRS didn't have enough money to do
its job well. But a lack of money isn't what makes you
target political groups—a directive is what makes you
do that. In any case, this week's bombshell makes it
clear the IRS,  from 2010 to 2012, the years of prime targeting, did have money to improve its processes.
During those years they spent $49 million on themselves—
on conferences and gatherings, on $1,500 hotel rooms
and self-esteem presentations. "Maliciously self-indulgent,"
said Chairman Darrell Issa at Thursday's House Oversight
and Government Reform Committee hearings.
What a culture of entitlement, and what confusion it
reveals about what motivates people. You want to increase
the morale, cohesion and self-respect of IRS workers?
Allow them to work in an agency that is famous for
integrity, fairness and professionalism. That gives people
spirit and guts, not "Star Trek" parody videos.
Finally, this week Russell George, the inspector general
whose audit confirmed the targeting of conservative groups, mentioned, as we all do these days, Richard Nixon's attempt
to use the agency to target his enemies. But part of that Watergate story is that Nixon failed. Last week David Dykes
of the Greenville (S.C.) News wrote of meeting with
93-year-old Johnnie Mac Walters, head of the IRS almost
40 years ago, in the Nixon era. Mr. Dykes quoted Tim
Naftali, former director of the Nixon Presidential Library
and Museum, who told him the IRS wouldn't do what Nixon
asked: "It didn't happen, not because the White House
didn't want it to happen, but because people like Johnnie Walters said 'no.' "

That was the IRS doing its job—attempting to be above politics, refusing to act as
the muscle for a political agenda.
Man—those were the days.
Posted by Betsy Combier at 6:58 AM