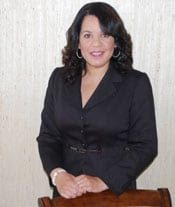 Dean Leslie Fenwick (howard.edu
(Correction: Fixing publication date for book, and
removing quote attributed to book)
LINK
Here is a provocative piece from Leslie T. Fenwick,
dean of the Howard University School of Education
and a professor of education policy, about what is
really behind urban school reform. It’s not about
fixing schools, she argues, but, rather, about urban
land development. Fenwick has devoted her career
to improving educational opportunity and outcomes
for African American and other under-served students.
By Leslie T. Fenwick
The truth can be used to tell a lie. The truth is that black parents’ frustration
with the quality of public schools is at an all time righteous high. Though black
and white parents’ commitment to their child’s schooling is comparable, more
black parents report dissatisfaction with the school their child attends.
Approximately 90 percent of black and white parents report attending parent
teacher association meetings and nearly 80 percent of black and white parents
report attending teacher conferences. Despite these similarities, fewer black
parents (47 percent) than white parents (64 percent) report being very satisfied
with the school their child attends. This dissatisfaction among black parents is so whether these parents are college-educated, high income, or poor.

The lie is that schemes like Teach For America, charter schools backed by
venture capitalists, education management organizations (EMOs), and Broad Foundation-prepared superintendents address black parents concerns about
the quality of public schools for their children. These schemes are not designed
to cure what ails under-performing schools. They are designed to shift tax dollars
away from schools serving black and poor students; displace authentic black
educational leadership; and erode national commitment to the ideal of public
education.
Consider these facts: With a median household income of nearly
$75,000, Prince George’s County is the wealthiest majority black
county in the United States. Nearly 55 percent of the county’s businesses
are black-owned and almost 70 percent of residents own homes,
according to the U.S. Census. One of Prince George’s County’s
easternmost borders is a mere six minutes from Washington, D.C.,
which houses the largest population of college-educated blacks in
the nation. In the United States, a general rule of thumb is that
communities with higher family incomes and parental levels of
education have better public schools. So, why is it that black parents
living in the upscale Woodmore or Fairwood estates of Prince George’s County or the tony Garden District homes up 16th Street in Washington
D.C. struggle to find quality public schools for their children just like
black parents in Syphax Gardens, the southwest D.C. public housing community?

The answer is this: Whether they are solidly middle- or upper-income
or poor, neither group of blacks controls the critical economic levers
shaping school reform. And, this is because urban school reform is not
about schools or reform. It is about land development.

In most urban centers like Washington D.C. and Prince George’s
County, black political leadership does not have independent access
to the capital that drives land development. These resources are still controlled by white male economic elites. Additionally, black elected
local officials by necessity must interact with state and national officials.
The overwhelming majority of these officials are white males who often
enact policies and create funding streams benefiting their interests and
not the local black community’s interests.

The authors of “The Color of School Reform” affirm this assertion in
their study of school reform in Baltimore, Detroit and Atlanta. They
found:

Many key figures promoting broad efficiency-oriented reform initiatives
[for urban schools] were whites who either lived in the suburbs or sent
their children to private schools (Henig et al, 2001).

Local control of public schools (through elected school boards) is
supposed to empower parents and community residents. This rarely
happens in school districts serving black and poor students. Too often
people intent on exploiting schools for their own personal gain short
circuit the work of deep and lasting school and community uplift.
Mayoral control, Teach for America, education management
organizations and venture capital-funded charter schools have not
garnered much grassroots support or enthusiasm among lower- and
middle-income black parents whose children attend urban schools
because these parents often view these schemes as uninformed by their community and disconnected from the best interest of their children.
In the most recent cases of Washington D.C. and Chicago, black parents
and other community members point to school closings as verification
of their distrust of school “reform” efforts. Indeed, mayoral control has
been linked to an emerging pattern of closing and disinvesting in schools
that serve black poor students and reopening them as charters operated by education management organizations and backed by venture capitalists.
While mayoral control proposes to expand educational opportunities for
black and poor students, more-often-than-not new schools are placed in
upper-income, gentrifying white areas of town, while more schools are
closed and fewer new schools are opened in lower-income, black areas
thus increasing the level of educational inequity. Black inner-city residents
are suspicious of school reform (particularly when it is attached to neighborhood revitalization) which they view as an imposition from
external white elites who are exclusively committed to using schools to recalculate urban land values at the expense of black children, parents and communities.

So, what is the answer to improving schools for black children? Elected officials must advocate for equalizing state funding formula so that urban school districts garner more financial resources to hire credentialed and committed teachers and stabilize principal and superintendent leadership. Funding makes a difference. Black students who attend schools where 50 percent of more of the children are on free/reduced lunch are 70 percent
more likely to have an uncertified teacher (or one without a college major
or minor in the subject area) teaching them four subjects: math, science,
social studies and English. How can the nation continue to raise the bar
on what we expect students to know and demonstrate on standardized tests
and lower the bar on who teaches them?

As the nation’s inner cities are dotted with coffee shop chains, boutique furniture stores, and the skyline changes from public housing to high-rise condominium buildings, listen to the refrain about school reform sung by
some intimidated elected officials and submissive superintendents. That refrain is really about exporting the urban poor, reclaiming inner city
land, and using schools to recalculate urban land value. This kind of
school reform is not about children, it’s about the business elite gaining
access to the nearly $600 billion that supports the nation’s public schools.
It’s about money.
Posted by Betsy Combier at 5:05 AM