LINK
Allison Kilkenny on November 12, 2012 - 9:25 AM ET
Strike Debt, a movement formed by a coalition of Occupy Wall Street groups looking to build a popular resistance to debt, plans to hold a telethon and variety show Nov. 15 in support of the Rolling Jubilee , a system to buy debt for pennies on the dollar, and abolish it.
The telethon, which has already sold out, according to organizer Yates Mckee, will feature artists including Jeff Mangum of Neutral Milk Hotel, Lee Renaldo of Sonic Youth, Guy Picciotto of Fugazi, Tunde Adebimpe of TV on the Radio, plus other surprise guests.
Strike Debt hopes to raise $50,000, which the group claims can then be used to purchase, and eliminate, around $1 million in debt.
The group has already performed a test run on the debt market  by spending $500 on distressed debt, buying $14,000 worth of outstanding loans and pardoning the debtors.
Business Insider called the test run "impressive " and "noble," although Alex Hern at the New Statesmanpoints out that,  while the law is on Occupy's side, the banks may not be. Hern points to Felix Salmon's discussion of the American Homeowner Preservation, which sought to buy up distressed mortgages  and find ways for the homeowners to stay in their homes and pay off their debt.
Salmon:

The idea might have been elegant, but it didn’t work in practice, because the banks wouldn’t play ball: they (and Freddie Mac) simply hated the idea of a homeowner being able to stay in their house after a short sale, and often asked for an affidavit from the buyer saying that the former owner would certainly be kicked out. 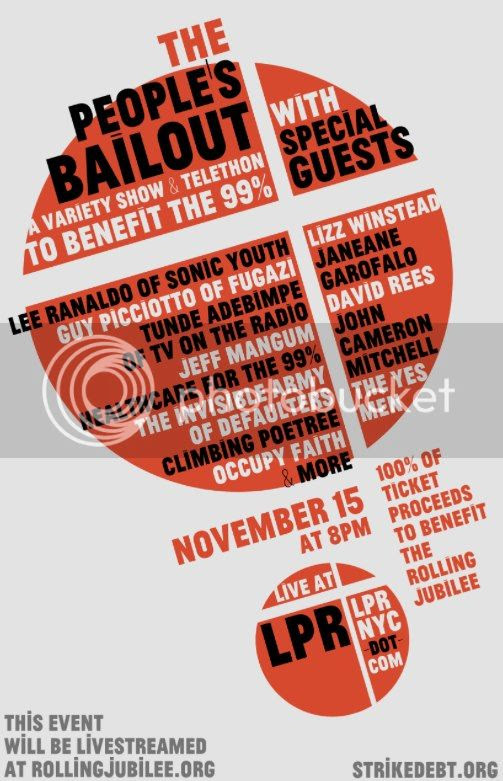 David Rees, one of the organizers behind the project,writes on his blog : "This is a simple, powerful way to help folks in need - to free them from heavy debt loads so they can focus on being productive, happy and healthy.

"Now, after many consultations with attorneys, the IRS, and our moles in the debt-brokerage world, we are ready to take the Rolling Jubilee program live and nationwide, buying debt in communities that have been struggling during the recession."

"As we've seen on the East Coast in the aftermath of Hurricane Sandy, we, the people, are the ones who are best equipped to provide the help that damaged communities need," Strike Debt stated in a press release.
"For years, all kinds of communities have been facing down a debt crisis that has stretched their resources and made them especially vulnerable to sudden shocks. 76 percent of American households are in debt, and 15 percent are being pursued by a debt collector. People shouldn't have to go into debt for basic necessities like groceries, healthcare and education. Though the banks got bailed out, the people are still waiting for their turn."
The wonkier subgroups of Occupy Wall Street such as Strike Debt and Occupy the SEC are interesting because these resistance fronts are familiar enough with the jargon and inner workings of the financial system to fight for reform from the inside out. In the case of Occupy the SEC, activists petitioned financial regulators  to help ensure that Dodd-Frank reforms are implemented in a way to keep pressure on the big banks, whereas Strike Debt hopes to turn the opaque debt market into an advantage for the 99 percent. 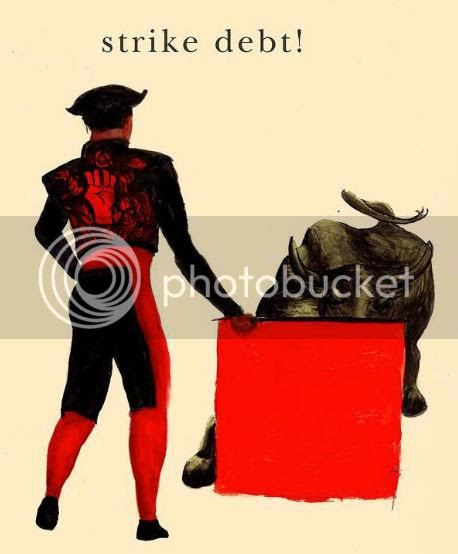 "The occupations last fall were a crack in the system, unleashing the political imagination. Strike Debt aims to deepen that crack, calling for us to imagine actively refusing compliance with the power of creditors over our lives. Significantly, the launch of the Rolling Jubilee falls on the one-year anniversary of the eviction of Zuccotti Park; while the work of Strike Debt has taken a very different form than physical occupation, since its start last summer it has channeled and refined the principles of direct action, mutual aid and dual power that were at the heart of the original camp.
Throughout this period Strike Debt has woven together days of action in the conventional sense — mass assemblies, marches and physical interventions at sites of financial injustice — with a wider diversity of tactics. Two major dates in this regard have been the September 17 OWS Anniversary Convergence and the October 13 Global Day of Action Against Debt and Austerity. In both cases, Strike Debt kept its eyes on the prize of long-term movement-building by supplementing the negative call to “Strike Debt” with the affirmative principle of “reclaiming the commons.”"

Occupy activists have lately been in the business of transforming philosophical debates about class inequality and government corruption into real, tangible solutions. This month alone, activists have been praised for their work in the aftermath of Hurricane Sandy in which it was oftentimes Occupy activists — not the Red Cross, U.S. military, or FEMA — helping to dispense aid to devastated communities. Now, it is Occupy activists who plan to buy-up debt and help some individuals who have long suffered under the crushing weight of debt
Posted by Betsy Combier at 6:56 AM