Valarie Strauss: Condi Rice-Joel Klein report: Not the new ‘A Nation at Risk’

Correction: One of the five names of task force members marked with an asterick below wrote an additional comment rather than a dissent, like the other four did. An earlier version said all five wrote dissents.
A new report being officially released today — by a Council of Foreign Relations task force chaired by Joel Klein and Condoleezza Rice — seems to want very much to be seen as the new “A Nation at Risk,” the seminal 1983 report that warned that America’s future was threatened by a “rising tide of mediocrity” in the country’s public schools.
It’s a pale imitation.
The U.S. Education Reform and National Security report, to be sure, has some similar language and themes of a Nation at Risk. It says (over and over) that America’s national security is threatened because America’s public schools aren’t adequately preparing young people to “fill the ranks of the Foreign Service, the intelligence community, and the armed forces” (or diplomats, spies and soldiers).
But it takes a very different view of the public education system than the authors of “A Nation at Risk ,” who sought to find ways to improve public schools and treat the system as a civic institution. The new report seems to look at public schools as if they are the bad guys that need to be put out of business, with a new business taking over, funded with public dollars.
A Nation at Risk made some basic recommendations, which included improving the curriculum, raising expectations for all children and improving the teaching force.
The Klein-Rice report makes three broad recommendations to fix the stated problem.
It calls for:
* expanding the Common Core State Standard initiative to include subjects beyond math and English Language Arts;
* an expansion of charter schools and vouchers
* an annual “national security readiness audit” that would look at how schools are addressing the country’s needs through increased foreign language programs, technology curriculum and more.
The report cites lots of statistics that paint public schools in the worst possible light, and continues the trend of comparing America’s educational system with that of high-achieving countries — but doesn’t note that these countries generally don’t do the kinds of things these reformers endorse. Its recommendations would lead to further privatization of public schools and even more emphasis on standardized testing.
Any reader of this blog may recall a post I recently did where I spelled out what the report would say well before it came out. I was pretty much on target. How did I know? The president of the Council on Foreign Relations, Richard N. Haass, chose Klein and Rice to be the co-chairs, according to Anya Schmemann, the council’s task force program director. And he most certainly knew what kind of report he would get.
Klein was chancellor of of New York City public schools for eight years, running it under the general notion that public education should be run like a business. He closed schools, pushed the expansion of charter schools and launched other initiatives before resigning in 2010 after it was revealed that the standardized test scores that he kept pointing to as proof of the success of his reforms were based on exams that got increasingly easy for students to take. Now he works for Rupert Murdoch.
When one member of the commission suggested that people with dissenting views be brought before the panel to present other ideas, and Diane Ravitch’s name came up, Klein vetoed it, members of the panel said. Ravitch is the leading voice against the test-based accountability movement and “school choice,” but Klein, who has long had tense relations with the education historian, didn’t want the panel to hear from her.
Rice was secretary of state under president George W. Bush. She has expressed her admiration for Bush’s key education initiative No Child Left Behind, which ushered in the current era of high-stakes testing but has now been called a failure by both Republicans and Democrats.
And talk about stacking the deck! The task force had 30 members, including a long list of people who support the kind of reform Klein implemented in New York. They include Wendy Kopp, founder of Teach for America; Margaret Spellings, former secretary of education; Jonah M. Edelman of Stand for Children, and Richard Barth of the KIPP Foundation. There were some members with differing perspectives, including Stanford University’s Linda Darling-Hammond and American Federation of Teachers President Randi Weingarten, but they were in the small minority.
Here’s the complete list of committee members. Five of the members have astericks by their names; four wrote dissents and one wrote additional comments. 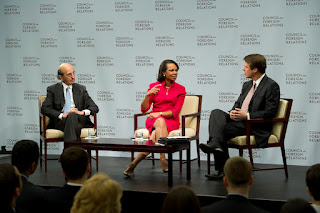 The United States' failure to educate its students leaves them unprepared to compete and threatens the country's ability to thrive in a global economy and maintain its leadership role, finds a new Council on Foreign Relations (CFR)–sponsored Independent Task Force report on U.S. Education Reform and National Security.
"Educational failure puts the United States' future economic prosperity, global position, and physical safety at risk," warns the Task Force, chaired by Joel I. Klein, former head of New York City public schools, and Condoleezza Rice, former U.S. secretary of state. The country "will not be able to keep pace—much less lead—globally unless it moves to fix the problems it has allowed to fester for too long," argues the Task Force.
The report notes that while the United States invests more in K-12 public education than many other developed countries, its students are ill prepared to compete with their global peers. According to the results of the 2009 Program for International Student Assessment (PISA), an international assessment that measures the performance of 15-year-olds in reading, mathematics, and science every three years, U.S. students rank fourteenth in reading, twenty-fifth in math, and seventeenth in science compared to students in other industrialized countries.
Though there are many successful individual schools and promising reform efforts, the national statistics on educational outcomes are disheartening:
The lack of preparedness poses threats on five national security fronts: economic growth and competitiveness, physical safety, intellectual property, U.S. global awareness, and U.S. unity and cohesion, says the report. Too many young people are not employable in an increasingly high-skilled and global economy, and too many are not qualified to join the military because they are physically unfit, have criminal records, or have an inadequate level of education.
"Human capital will determine power in the current century, and the failure to produce that capital will undermine America's security," the report states. "Large, undereducated swaths of the population damage the ability of the United States to physically defend itself, protect its secure information, conduct diplomacy, and grow its economy."
The Task Force proposes three overarching policy recommendations:
The Task Force includes thirty-one prominent education experts, national security authorities, and corporate leaders who reached consensus on a set of contentious issues. The report also includes a number of additional and dissenting views by Task Force members. The Task Force is directed by Julia Levy, an entrepreneur and former director of communications for the New York City Department of Education.
The Task Force believes that its message and recommendations "can reshape education in the United States and put this country on track to be an educational, economic, military, and diplomatic global leader."

Posted by Betsy Combier at 9:17 PM